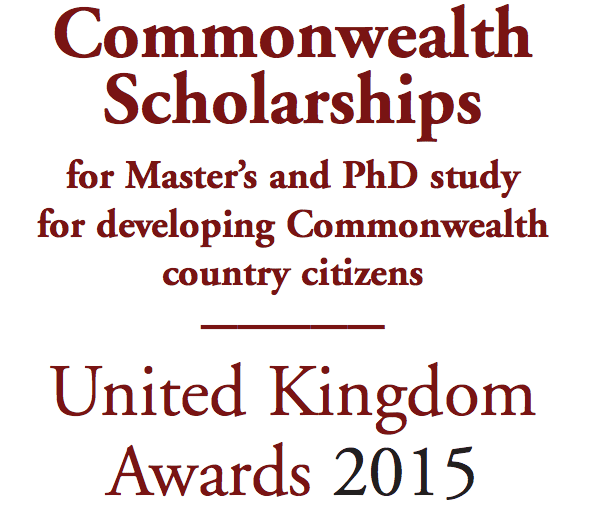 The Commonwealth Scholarships for Master’s and PhD study in the UK are offered for citizens of developing Commonwealth countries. These scholarships are funded by the UK Department for International Development (DFID).

ELIGIBILITY
To apply for the awards covered in this prospectus, candidates should:
•Be Commonwealth citizens, refugees, or British protected persons
•Be permanently resident in a developing Commonwealth country (a full list is available at http://bit.ly/cscuk-developing-cw-countries)
• Be available to commence their academic studies in the United Kingdom by the start of the UK academic year in September/October 2015
• Hold, by October 2015, a first degree of upper second class Honours standard (or above); or a second class degree and a relevant postgraduate qualification, which will normally be a Master’s degree
VALUE OF AWARDS
Each Scholarship provides:
• Student concessionary or other approved airfare to the United Kingdom and return on expiry of the Scholarship (the cost of journeys made before final award confirmation will not normally be reimbursed, nor can fares be paid for a Scholar’s dependants)
• Approved tuition and examination fees
• A personal maintenance allowance at the rate of £977 per month (£1,208 per month for those studying at institutions in the London Metropolitan area) – rates quoted at 2014-2015 levels
• A grant towards the expenses of preparing a thesis or dissertation, where applicable
• An initial arrival allowance, including visa reimbursement where applicable
• A grant for expenses for approved study travel within the United Kingdom or overseas
• A contribution towards fieldwork costs for those Scholars under taking doctoral studies for whom a case has been made for fieldwork outside the United Kingdom. This shall not normally exceed one economy class return airfare to the fieldwork location
• A paid mid-term fare to their home country for Scholars on three year doctoral awards. Scholars for whom fieldwork fares are provided to their home country shall not be entitled to a mid-term fare home, nor Scholars who have claimed (or intend to claim) spouse or child allowances for more than 12 months during their award
• For Scholars selected by the Commission for awards exceeding 18 months, a spouse allowance of £220 per month is payable provided that the Scholar and spouse are residing together at the same address in the United Kingdom.
How to Apply:
The Commission invites the nomination of candidates for Commonwealth Scholarships from a number of sources. These are described below.
Candidates may choose any of these ‘nominating routes’ for any category of award. Candidates must apply locally in the first instance. The Commission does not accept direct applications. For the following categories of award…
•12 months’ support towards completion of a full-time taught postgraduate qualification at an eligible UK institution. Please note that the Commission offers awards for one-year Master’s programmes only, and does not fund MBAs
• Up to 36 months’ support towards completion of a full-time doctoral postgraduate qualification at an eligible UK institution … nominations are invited through the following channels
• The candidate’s national Commonwealth Scholarship agency. This is the main route of application and a full list of Commonwealth Scholarship agency addresses can be obtained from the CSC website
• The Executive Head of an eligible developing country university on the staff of which the applicant serves. In the case of Bangladesh and India, nominations are made through the University Grants Commission; in Pakistan, through the Higher Education Commission; and in Sri Lanka, through the Secretary, Ministry of Higher Education
• Selected non-governmental organisations and charitable bodies Candidates can apply to study at Master’s or doctoral level at UK institutions with which the Commission has a part funding agreement. A list of institutions that have agreed to offer part funded Scholarships in 2015-2016 is available at http://bit.ly/cscuk-uk-universities. Agreement to part fund Scholarships is at the discretion of individual institutions

All Commonwealth Scholarship candidates must be nominated by an approved nominating agency/ university/university body, and must submit their application form using our Electronic Application System (EAS).

The EAS will close to applicants on 3 December 2014 and no further applications can be submitted after that date. The CSC will not accept any applications which are not submitted via the EAS to the nominating agency/university/university body in the candidate’s home country.