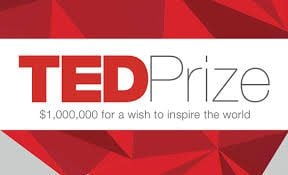 Each year, TED award the TED Prize to a leader with a bold, innovative vision for sparking global change. The TED Prize winner receives $1,000,000 — and support from the TED community’s wide range of resources and expertise — to make their dream become a reality.

TED (Technology, Entertainment, Design) is a global set of conferences run by the private non-profit Sapling Foundation, under the slogan “Ideas Worth Spreading”.

The Prize begins with a big wish—a wish to inspire thinkers and doers across the globe.

Nominate an individual — or yourself — to envision and execute a high-impact project that can spur global change. The TED Prize winner will have an ambitious wish — and the vision, pragmatism and leadership to turn it into reality. The TED Prize team will review all nominations from all sources in order to:

When nominating an individual, the nominator is welcome to approach the nominee about drafting a potential wish. If a nominee is strong, and no wish is included, the TED Prize team will reach out to them directly during the short-listing process.

TED will reach out to nominees directly if their applications progress to the finalist stage, to request the following:

Finally, the winner is selected by a jury drawn from leading members of the TED community.

The winner of the 2016 TED Prize will be revealed when they announce their wish from the TED2016 stage in Vancouver, BC.

Visit the Official Webpage of the 2016 TED Prize