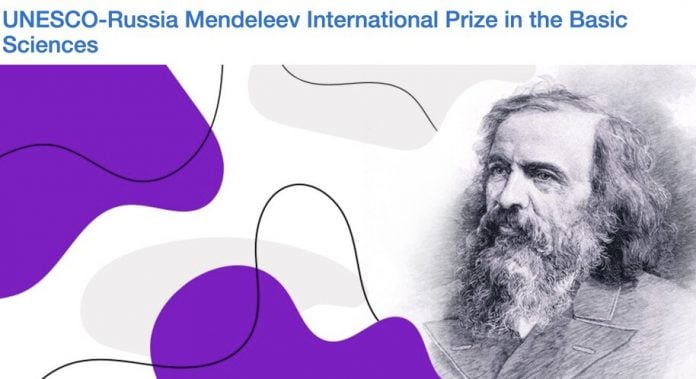 The UNESCO-Russia Mendeleev International Prize in the Basic Sciences aims to promote and honour excellence in the basic sciences, defined to include the disciplines of chemistry, physics, mathematics and biology, the foundation on which scientific knowledge can be propagated and which are fundamental to the advancement of innovation and sustainable development.

UNESCO invites the governments of Member States, in consultation with their National Commissions, the non-governmental organizations maintaining official partnerships with UNESCO and active in relevant fields covered by the Prize, the UNESCO Chairs, the Category 2 Centres, the international scientific unions and universities to propose individual candidates for the 2021 edition of the UNESCO-Russia Mendeleev International Prize in the Basic Sciences.

Awarded every year to two prize-winners, its purpose is to reward individuals for their major achievements in terms of development, diffusion, and international cooperation in the basic sciences, which had a significant transformational impact on a regional or global scale. Each of the two individual prize-winners will receive a financial award of USD 250,000 as well as a gold medal and a diploma.

No self-nomination shall be considered.

The Prize is awarded to candidates whose scientific achievements are conducive to socio-economic transformation and impact development on a regional or global scale, based on:

There is no age limit for the candidates.

Candidatures of women scientists are encouraged.

Who can submit nominations?

The nominations can be submitted by the following entities:

No self-nomination shall be considered.

How to submit nominations?

Nominations can only be submitted electronically through an online dedicated template.

Please register(link is external) and consult the Rules and Regulations before filling in the template.

Nominations must be completed in full in English or French.

Nominations that are incomplete or received after the deadline shall not be considered.

The International Mendeleev Prize’s Team reviews all applications received before the deadline and transmits the eligible applications to the Jury of the Prize.

The Jury meets once a year to assess the applications.

The Director-General selects the winners based on the assessment and recommendation of the Jury of the Prize.

The Prize shall be awarded by the Director-General or her representative to the individual winners during an official ceremony held for that purpose in alternation at UNESCO’s premises at Headquarters and in the Russian Federation.

The Africa Young Innovators for Health Award (Financial Support of $75,000)