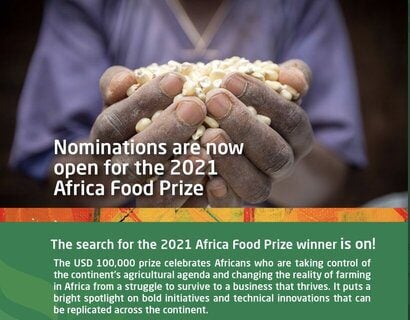 The Africa Food Prize is the preeminent award recognizing an outstanding individual or institution that is leading the effort to change the reality of farming in Africa—from a struggle to survive to a business that thrives.

The US $100,000 prize celebrates Africans who are taking control of Africa’s agriculture agenda. It puts a spotlight on bold initiatives and technical innovations that can be replicated across the continent to create a new era of food security and economic opportunity for all Africans.

Visit the Official Webpage of the Africa Food Prize 2021