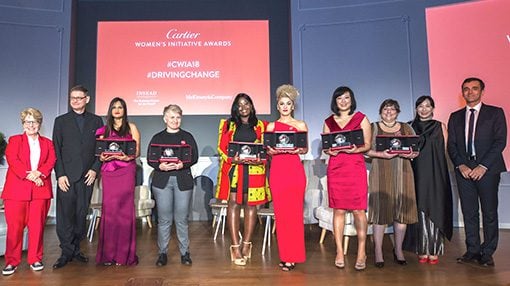 Since 2006, the Cartier Women’s Initiative Awards has supported 198 female entrepreneurs worldwide. Each year, 21 finalists representing 7 regions (Latin America, North America, Europe, Sub-Saharan Africa, Middle East & North Africa, Far East Asia, South-East Asia) are selected during the first round of the competition. These finalists are then invited to attend the Awards week (exact location still TBC) during which the second round of the competition takes place. After the final jury evaluation, 7 laureates, one for each region, are announced on stage during the Awards ceremony.

The 21 finalists, representing the top 3 projects from each of the 7 regions, will receive:
One-to-one personalized business coaching prior to the Awards week
A series of entrepreneurship workshops, knowledge sessions and networking events during the Awards week
Media visibility
A scholarship to attend the INSEAD Social Entrepreneurship 6-Day Executive Programme (provided their business meets INSEAD’s eligibility criteria)
Networking opportunities through the Cartier Awards community and beyond