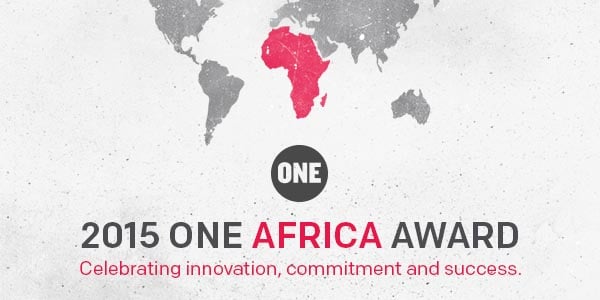 The 2015 ONE Africa Award winner will be announced at a ceremony to be held in Accra, Ghana on 20 November 2015 as part of the Mo Ibrahim Foundation Annual Governance Weekend.

The 2015 finalists for the annual $100,000 USD ONE Africa Award ) were today announced by the ONE Campaign in Johannesburg.

The 2015 ONE Africa Award winner will be announced at a ceremony to be held in Accra, Ghana on 20 November 2015 as part of the Mo Ibrahim Foundation Annual Governance Weekend. The ceremony will take place a the Accra International Conference Center from 16h30 to 17h30.

For the last seven years, the ONE Campaign has recognized and promoted the innovative work of Africa-driven and Africa led advocacy efforts of those civil society organizations making on the ground progress towards the Millennium Development Goals (MDGs) with the ONE Africa Award.

The $100,000 USD annual prize awards and recognizes innovative African efforts to fight poverty and will incentivise many more of such efforts towards the attainment of the new Sustainable Development Goals (SDGs).

Nachilala Nkombo, Acting Africa Director at ONE applauded the work of the finalist organisations, and congratulated all of the 254 aspirants this year.

“As we exit the MDGs and prepare to implement the new  SDG, this year’s finalists standout  as examples of the effective work African  organisations working  tirelessly  sometimes with limited resources across the continent to help their communities make progress in the fight against poverty and diseases. Be it  halving extreme poverty, empowering women, or ensuring environmental sustainability.  The response rate was  overwhelming. Our finalists represent some of the most innovative and results oriented development advocates in Africa, whose incredible work  will no doubt contribute to the attainment of SDGs in Africa by 2030,” she said.

“At ONE we advocate for progressive policy solutions to African governments that promote economic opportunity and development, which are necessary to eradicate extreme poverty and preventable diseases in Africa. None of that would be possible without the indispensable role of indigenous African civil society organisations in accelerating the achievement of the Millennium Development Goals. We are therefore proud to support and partner with local civil society organizations, and it is for this reason that we initiated the ONE Africa Award in 2008. By honouring the commitment and progress on the ground, we hope that new efforts can be inspired and we can collectively create a better future for all Africans. Today, I am honored to recognize and announce this year’s finalists,” Nkombo added.

Previous winners of this prestigious award include

ABOUT THE 2015 ONE AFRICA AWARD FINALISTS:

Community Link works toward  sustainable, self-reliance livelihoods of refugees in Nakivale settlement, known as one of the oldest settlements in Uganda. One such initiative is the creation of an electricity plant that uses a maize milling machine to provide electrical power to 100 surrounding tents/homes in the settlement.

Support for Women in Agriculture and Environment – Uganda

Founded in 1992 by a group of women from the forest-dependent community in Rwoho Natural Tropical Forest, SWAGEN’s advocacy activities and negotiations resulted in the Collaborative Forest Management agreement with the Ugandan government.