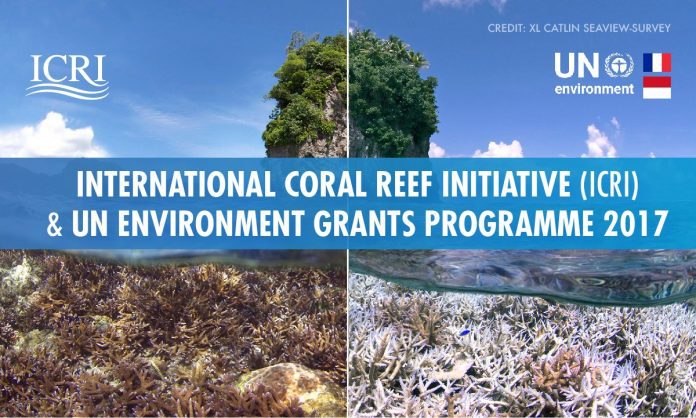 This grants programme is a joint initiative of the International Coral Reef Initiative (ICRI) and UN Environment, to catalyze implementation of the ICRI Plan of Action 2016-2018 and the United Nations Environment Assembly (UNEA) resolution 2/12 on sustainable coral reefs management. Grants under this programme are funded by UN Environment through contributions from France and the Principality of Monaco.

The International Coral Reef Initiative (ICRI) is an informal partnership among governments, international organisations and non-government organisations. It strives to preserve coral reefs and related ecosystems around the world by implementing Chapter 17 of Agenda 21, which was adopted by the international community at the Rio Earth Summit in 1992 and calls for the protection and rational use of oceans, seas and coastal areas. The initiative contributes to raising awareness on the importance of and threats to coral reefs and related ecosystems, recognising that they are facing serious degradation mainly due to anthropogenic stresses. The French government is hosting ICRI for the 2016-18 biennium.

Who are the ICRI/UN Environment grants targeted at?
In such cases the application must demonstrate that the project is driven by the community
group. The applicant organization will be responsible for meeting the contractual obligations of the grant.
Who can apply for an ICRI/UN Environment grant?
Applicants must be a legal entity, for instance:
Applicants that are NOT governments or government agencies need to fulfil due diligence requirements of UN Environment. Individuals may not apply.
Documents: