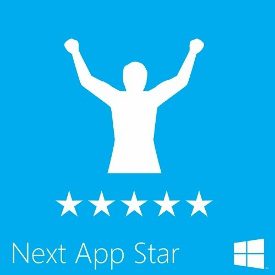 The objective of this contest is to showcase Windows Phone 8 as a great platform for developing cool apps. For purposes of this Contest, each complete Windows Phone app you have published and available for Windows Phone 8 users as of 11:59 p.m. Pacific Time (PT) on March 5th will be called an “entry”. Apps will be judged based on the criteria below and the top 64 winners will be placed in a head to head tournament style voting challenge to determine the ultimate champion of the Contest.

Whether you already have an app or want to create a new one for Windows Phone 8, this challenge will let consumers try yours and others, then vote for their favorites. It’s a fun, head-to-head, bracket-style competition that starts by rating all the entries and selecting the top 64. Then, these 64 are whittled down over several weeks of consumer voting. Think your app has what it takes? Register, let the world decide, and win cool prizes!

WHAT ARE THE START AND END DATES?

To qualify for the Rating and Public Voting Period, all entries must be submitted by the end of the Submission Period.

How to get involved

All you have to do is register via our email opt-in and make sure your apps are live by 11:59 p.m. PST on March 5, 2013 in order to be included in the competition.

From March 6 through March 12, apps will be judged based on consumer ratings and a professional assessment of app quality. The top 64 will move forward to the voting rounds. Make sure your apps are attractive and high-quality, so that they have a good chance at making the cut!

From March 19 through April 8, the field of 64 will be narrowed to 32, 16, 8, 4, 2, and finally the grand prize winner based on consumer voting. For the voting public, we’ll also be giving away a Lumia 920 every day during the voting period via sweepstakes to encourage people to check out your apps and vote.

What are you waiting for – register today to get visibility for your app and the opportunity to win great prizes. Good luck!

* Contest open only to students, hobbyists, or developers in the field of software technology 18+. Submission period ends 3/5/13 and public voting period ends 4/8/13. For details, see Official Rules of the Microsoft Windows Phone Next App Star Contest.

All 64 challenge winners will receive:

All of the above, PLUS

Featured placement of your app in a Windows Phone primetime TV ad in the U.S.

Register Now for the Windows Phone Next App Star Contest