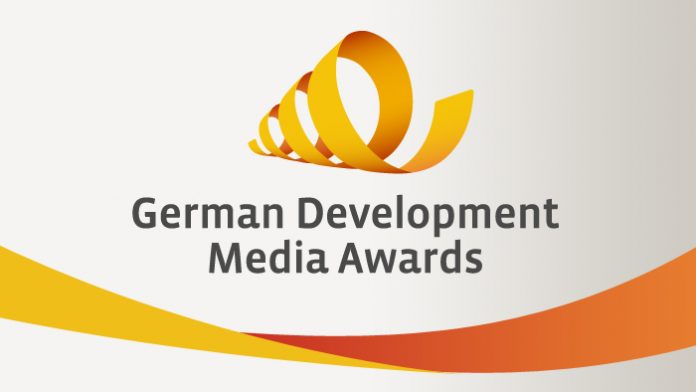 The German Development Media Awards recognize excellence in human rights and development journalism. The awards champion independent media across the world and put the spotlight on journalists telling important stories affecting their communities, countries and regions.

These awards are a new initiative by the German Federal Ministry for Economic Cooperation and Development (BMZ) and Germany’s international broadcaster, Deutsche Welle.

The BMZ has a proud tradition of honoring German journalists who focus on international development issues. Now, in partnership with Deutsche Welle, the new German Media Development Awards are also open to journalists from Africa, Asia, Eastern Europe, Latin America and the Middle East.

The German Media Development Awards aim to support the work of talented journalists around the world and to emphasize the role of human rights and development in strengthening democracy, good governance, civil society and freedom of the press.

If your work is published or broadcast by a German media organization, you are also eligible to enter the award.

African photographers can enter the special People’s Choice Award which honors exceptional photography on the topic Human Rights in Africa.

You may also submit a joint or team entry. However, when registering, team entries must nominate one contact person.

You can register online. You will need to provide us with some information about yourself and your entry as well as upload your Curriculum Vitae (CV). At the end of the online registration, you will be able to upload your entry directly to the Deutsche Welle server (www.germanmediaawards.org).

Video files cannot exceed 80 MB and must be in one of the following formats: mpg, mp4, mpeg, mov, avi, wmv, flv.

Your photo file should be in high resolution and as large as possible. The minimum requirement is 300 dpi with a size of 1024 x 576 pixels. We accept .jpg and .png photo formats.

If it is not possible to upload your entry due to technical reasons, entries can be sent to:
German Development Media Awards
Deutsche Welle Akademie
Voltastrasse 6
13355 Berlin
Germany

The closing date for receiving online and postal entries is May 31, 2013. We will not accept any entries which arrive after this date.

Please note, entry material will not be returned regardless of its format.

What Kind of Material Can I Submit?

We accept all forms of journalistic expression including, among others, articles and features for print and online media; news and documentary reports for television, radio and online; and multimedia projects in all types of innovative formats.

Your entry must address the topic Human Rights and Development. By definition, human rights include civil and political rights, as well as economic, social and cultural rights.

Your entry must have been published or broadcast by a media organization based in Africa, Asia, Latin America, the Middle East, Eastern Europe or Germany.

Your entry must also have been published or broadcast for the first time during the period January 1, 2012 to May 31, 2013 inclusive.

Audio and video reports cannot be longer than 15 minutes. Reports which were originally longer can be shortened to 15 minutes for submission purposes.

You can only submit one entry.

You cannot submit any work that has been published or broadcast by Deutsche Welle.

What can I win?

In addition, the awards also cover the costs for each of the seven winners to attend the awards ceremony to be held August 14, 2013 in the German capital, Berlin.

In the case of joint or team entries, only the person nominated by the team will be invited to the ceremony.