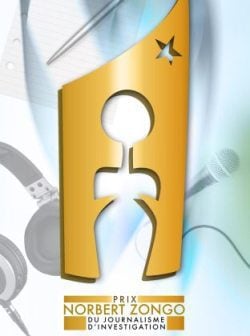 Price Norbert Zongo was opened in 2011 to all professional journalists in Africa regularly employed in the Medias or collaborating with Medias in Africa.

It aims at promoting the journalism of investigation, research, on relevant political, economic, social and cultural issues. It consists in :

reinforcing the importance of the role of the journalist.

recognizing the talents of journalists.

Rewarding courage, determination and the respect of deontological principles of journalism.

Three categories : newspaper, radio and television were selected to reflect their specificity.
• Newspaper : send the original and a photocopy of the article submitted.
• Television : send two copies VHS or DVD to the topic subject.
• Radio : send two audio cassettes or 2 CDs of subject matter.

Note : Only works in French or English are accepted, as it is applied to all candidate of another language please translate his work into English or French.

The deadline for receipt of applications is 15 November 2013 .

Two copies of the works must be sent to the jury, at the