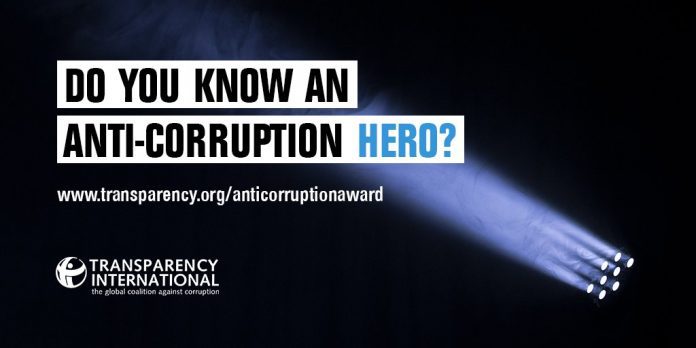 Launched in 2000 as the Integrity Award, and renamed in 2016, the Anti-Corruption Award honours remarkable individuals and organisations worldwide, including journalists, public prosecutors, government officials and civil society leaders.

Winners are a source of inspiration to the anti-corruption movement because their actions echo a common message: that corruption can be challenged.

The Anti-Corruption Award may be conferred to a person (or an organisation) discharging official or professional duties as well as to an activist(s) from all walks of life.

The Anti-Corruption Award Committee, the body responsible for evaluating nominations and choosing winners, may choose up to two award recipients. In making these awards, the Committee will take into consideration the need to recognise efforts in diverse fields of civil society, the private sector and government and to acknowledge anti-corruption initiatives throughout the world.

The Award consists of a trophy and participation in a public award ceremony during the 19th edition of the International Anti-Corruption Conference to take place fromto take place from the 2nd – 5th June 2020 in Seoul, Republic of Korea.

ELIGIBILITY
Nominees must meet the following requirements:
 Nominees must have undertaken an action that is likely to significantly
influence, or to have had a significant impact on, existing levels of corruption
in his/her respective country or region.
 The action should be one likely to attract interest and emulation in other parts
of the world.
 The action must be particularly courageous and exemplary, inspirational and
deserving of wide international recognition.
 The action should recognise the longevity of commitment to fighting
corruption.

NOMINATION PROCEDURE
 Nominations may be submitted by any person(s) or organisation(s) at any time
in accordance with the provision of these rules. Self-nominations will not be
accepted.
 Previous candidates can be re-nominated provided their information is
updated.
 Individuals and organisations submitting nominations, are encouraged, where
possible, to submit their nomination, together with or including the support of
an appropriate TI chapter.
 Where a nomination is received other than from a TI chapter, the appropriate
chapter will be invited to assist the Award Committee by providing its own
assessment of the strength of a nomination.
 The Anti-Corruption Award Committee may take it upon itself to make a
nomination.
 Nominations submitted by salaried staff of the TI Secretariat will not be
permitted.
 The nomination process will be publicised through TI’s website and social
media channels as well as via outreach to external organisations.