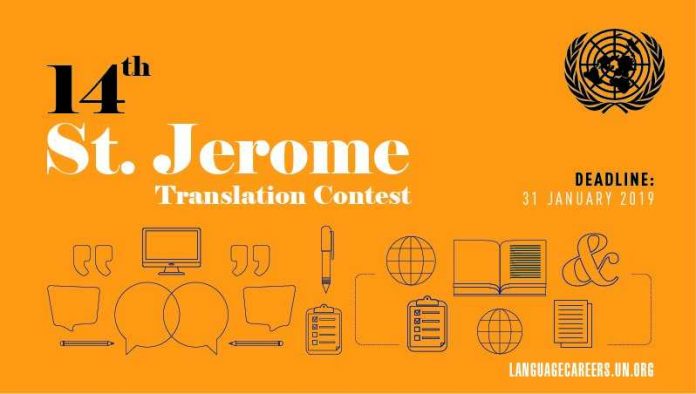 Following up on the commemoration of International Translation Day, celebrated every year on 30 September, the Conference Management Service of the United Nations Office at Vienna is pleased to announce the launch of the fourteenth edition of the St. Jerome Translation Contest.

The contest is open to the following participants:

Participants should submit their entry as a file attached to an email together with the completed registration form. Participants who are on short-term contracts are asked to use a personal email address so that they can be contacted later. Students at MoU or partner universities may only submit entries through their University Focal Point; texts submitted directly by students cannot be considered.

Entries should be submitted to the following email address not later than 31 January 2019: [email protected]

The entries will be evaluated by a panel of two to three judges for each language. Judges will pay particular attention to accuracy in conveying not only the meaning but also the nuances of the source text, and to style. As in previous years, each submission will be identified by a number and not by the name of the contestant in order to ensure anonymity in the selection process.

The winners’ names will not be disclosed until the official announcement at the awards ceremony, to be held at the United Nations Office at Vienna in May 2019. The exact date and venue will be announced in due time.