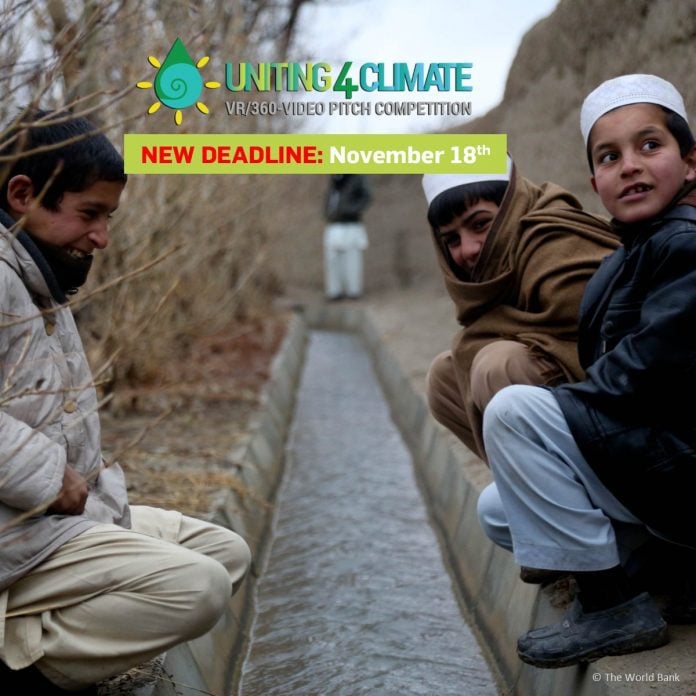 This competition invites everyone (18+) who is committed to coming together to reduce the threats to our Planet and intent on creating or multiplying solutions for immediate climate action to send a traditional illustrative video concept together with a written description explaining in detail their plans for the production of a 360-video (Virtual Reality) on how we are “Uniting for Climate Action.”
The video pitch submissions could highlight solutions to overcoming climate threats for vulnerable and coastal communities, supporting ocean and environmental protection, addressing rising and warming oceans, managing fresh water resources, preventing pollution and waste, building smarter and more resilient cities and making the linkages with other climate actions.
The submissions should describe simple, but ingenious ideas that will enable relatively low cost VR production with the focus primarily on the subject matter rather than the technique. The potential cost vis-à-vis the creativity envisaged will be taken into account in the judging process.
RULES
1. The contest is open to individuals and teams. There is a maximum limit of five members for any team
2. Participants submitting videos to the competition must be 18 or older as of August 1st 2017.
3. Individuals and teams can submit as many entries as they would like.
4. Video entries must be created by and owned by the Participants.
5. Video entries can be recorded using all devices available.
6. Video entries are in one category. Participants need to enter a standard ‘Video Pitch’, up to 1 minute in length together with a concept description of up to 400 words.
7. Videos may be recorded in any language and descriptions written in any language, but English subtitles or translations should be added to non-English entries.
8. Winning entries from the Connect4Climate Photo/Video Competition 2011, Voices4Climate 2012, Action4Climate Short Video Documentary Competition (2014), Film4Climate Global Video Competition 2016 may be re-submitted to the Uniting4Climate Competition.
9. Winners will be selected by an External Judging Panel composed of esteemed film, music, communication, innovation and climate professionals.
10. The External Judging Panel will judge the film entries based on the following equally weighted criteria:
11. Submissions must be received by direct video file upload through the Uniting4Climate Competition platform before the deadline: 11:59 pm EST, November 18, 2017. Do not submit DVDs or Blu-rays. Connect4Climate reserves the right to extend the deadline.
PRIZES
SPECIAL PRIZES
Other special prizes or Highly Commended Acknowledgements may be awarded depending on the submissions received and the opinions of the jury.
WINNERS
The Judging Panel will select the winner or winners (individuals or teams of up to 5) based on the following equally weighted criteria:
In the event of a tie for the main prize, the winner will be selected based on the criteria described in (1), then (2), and (3). If there is still a tie, the winner will be selected based on the vote by the Judging Panel President.