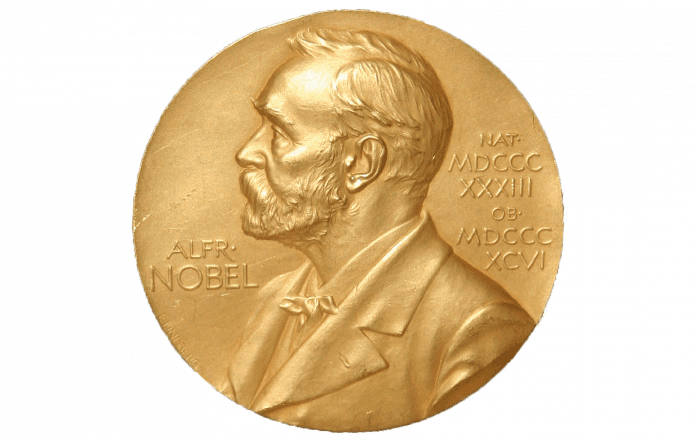 Victor Ochen, himself a childhood victim of war, and the African Youth Initiative Network, which he founded to work for the healing of trauma and to promote youth leadership, have been nominated for the 2015 Nobel Peace Prize by the American Friends Service Committee (AFSC).

“Victor Ochen has consistently shown both commitment and effectiveness in his efforts to address the needs of victims. He has worked for transitional justice, while simultaneously promoting human rights through nonviolent means, nourishing the leadership skills of other young people, and challenging systemic issues that lead to the continued vulnerability and suffering of war victims,” the AFSC wrote in its nomination letter.

At age 33, Victor Ochen has been a steadfast advocate of nonviolence most of his life. His life story mirrors the stories of the populations his organization serves, but he has never allowed his own grief and trauma to coerce him toward violent reactions to the hardships he has faced.

Though it has calmed somewhat in recent years, the conflict between the government of Uganda and the Lord’s Resistance Army (LRA) has has had a massively detrimental impact on life in northern Uganda for over 25 years, affecting millions – including Victor Ochen’s own family.

Forced as a child to flee the conflict, Victor supported his schooling and his family by making and selling charcoal – even as schools and homes were burned to the ground and many of his schoolmates and neighbors were abducted and killed. Most of his peers saw their options as limited to either joining the Ugandan army or being forced into the LRA. Even after he lost his mother because of the LRA, Victor Ochen saw a better path.

“Based on a promise to his mother never to pick up a gun, and his deeply-held conviction that guns only invited more violence, he reasoned that staying focused on helping each other to survive and finding ways to pay for school fees was a better path,” the AFSC wrote.

“While (working with) victims in the community, he continued to secondary school, graduated and then went on to earn a Bachelor’s degree….In December 2003, Ochen’s oldest brother and cousin were abducted by the LRA; both are now among the thousands… whose fate remains unknown. Even after the abduction…Victor never wavered ion his commitment to nonviolence,” the letter continues.

He founded The African Youth Initiative Network, based in Lira, Uganda, in 2005, to work in two critical areas: medical rehabilitation of those who have suffered burnings, mutilations of all kinds, rape, and psychological torture, and the building and promoting of youth leadership.

It has built a national and international network of medical professionals that helps victims rebuild their homes and livelihoods. Just one network program in the Acholi region provided 1,500 medical treatments and counseling sessions to 574 victims during 2011-2012.

The youth-led network conducts outreach programs to promote dialogue between youth in different communities in northern Uganda, and has begun a one-week Peace Camp to teach skills in conflict resolution, peace building and leadership, as well as understand the law as a tool for human rights.

In May 2014, the network organized the first National War Victims Conference, attended by more than 250 people from all corners of the country, as well as representatives from Kenya, Mali, Nigeria, Burundi and other countries. The goal was to develop a roadmap for a successful transitional justice process in Uganda to address healing the physical and emotional wounds of war to build toward national reconciliation.

The AFSC wrote that Victor Ochen and AYINET

“offer a unique and powerful example to be emulated by marginalized people all over the world. We therefore respectfully request that the Norwegian Nobel Committee recognize Victor Ochen and the African Youth Initiative Network’s work on behalf of victims of violent conflict by awarding them the 2015 Nobel Peace Prize.”

About the Nobel Peace Prize:

The Nobel Peace Prize is one of the five Nobel Prizes created by the Swedish industrialist, inventor, and armaments manufacturer Alfred Nobel, along with the prizes in Chemistry, Physics, Physiology or Medicine, and Literature. Since 1901, it has been awarded annually (with some exceptions) to those who have “done the most or the best work for fraternity between nations, for the abolition or reduction of standing armies and for the holding and promotion of peace congresses”

The Chairman of the Norwegian Nobel Committee presents the Nobel Peace Prize in the presence of the King of Norway on 10 December each year (the anniversary of Nobel’s death). The Peace Prize is the only Nobel Prize not presented in Stockholm. The Nobel laureate receives a diploma, a medal, and a document confirming the prize amount. As of 2013, the prize was worth 10 million SEK (about US$1.5 million). Since 1990, the Nobel Peace Prize Ceremony is held at Oslo City Hall.