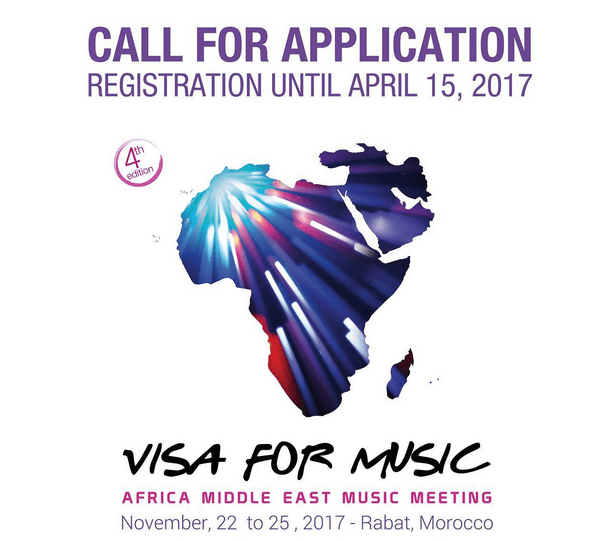 The 4th edition of Visa For Music, the first professional music market for Africa and the Middle East, will be held from 22th to 25th November 2017 in Rabat, Morocco.

The call for applications for the showcase program is open until 15th April 2017. 30 artists or groups are going to be selected by a qualified jury to perform in front of music industry professionals from all over the world.

Visa For Music (VFM) is the first professional market of Africa and Middle-East musics : it is a new event born in 2013 and organizing its 4th edition in 2017, with 30 showcases at the center of the project, but also conferences, documentary projections, speed-meetings, workshops and trainings…

This project was born from a paradox : on the one hand, the lack of visibility for African and Middle-Eastern artists at an international level and, on the other hand, a very important artistic dynamism and musical creation from these musicians. To fight against this problem, Visa For Music has as first goal to highlight the artistic creation of Africa and the Middle-East, first of all regarding the world music and actual music.

The six main goals of Visa For Music are:

After three edition Visa For Music became one of the essential and major meeting places for professionals of the whole music industry, as a sharing platform for the defense and promotion of the musical sector of African and Middle-Eastern countries, with approximately 3200 professionals assisting to the 123 showcases by the 693 artists.

As a meeting and sharing platform, Visa For Music is aimed at professionals of the music industry, more specifically :

As an international meeting place and new market, Visa For Music also wants to gather all the representatives of the cultural landscape:

To apply to participate to the 4th edition of Visa For Music, send the documents mentioned below. Any incomplete application or received after this deadline will not be considered.

Results will be posted online on our official website starting from July 2017.