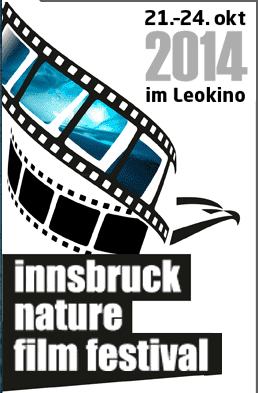 The Innsbruck Nature Film Festival is an international nature film competition, offering motivated filmmakers a platform for presenting their latest work. Four film festival days with film presentations and a high-quality side program are the framework for an on-topic, ecological, and artistic discourse. The Tiroler Umweltanwaltschaft [Environmental Ombuds Office Tirol] as the organizer is looking forward to welcoming you in Innsbruck in fall!

The 2014 INFF takes place from Oct. 21 till Oct. 24 in Leokino Cinema in Innsbruck. Leokino is not only one of the most important and open cinemas in Tirol for off-mainstream films and events, but also an architectural highlight in the center of Innsbruck. Its authentic atmosphere and technical expertise are the main reasons for the cooperation with the Leokino, which has lasted more than a decade.

The INFF – an International Film Festival on the subject of nature & environment – takes place in 2014 for the second time. Professional filmmakers, as well as amateurs and young talents are cordially invited to participate.  A renowned expert jury will select the winners in each category.

The Innsbruck Nature Film Festival (INFF) is an International Film Festival on the subject of nature & environment that takes place in 2014 for the second time. The 2014 INFF is scheduled for 21st October through 24th October in Leokino Cinema in Innsbruck, Austria.

The 2014 Innsbruck Nature Film Festival is presented by the Tiroler Umweltanwaltschaft. Since 2001 Landesumweltanwalt Johannes Kostenzer has organized the Innsbruck Nature Film Days, a cinema event lasting several days, which has become established as one of the fixed points in the event calendar of the City of Innsbruck. One of the central tasks and integral part of modern nature conservation work is to make people aware of special attractions and phenomena in nature, of its beauty and diversity.

The categories for the 2014 INFF are Documentary, Feature Film, Short Film, and Youngsters.

A package of prizes is offered for the award-winning films, in total worth approximately EUR 15,000.

Category Feature: to be announced.

The categories for the 2014 INFF are:

Visit the Official Webpage of the  Innsbruck Nature Film Festival