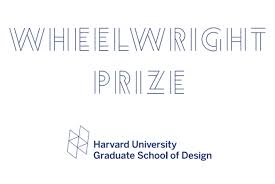 The Wheelwright Prize is a $100,000 travel-based research grant awarded annually by Harvard University Graduate School of Design to early-career architects who have demonstrated exceptional design talent, produced work of scholarly and professional merit, and who show promise for continued creative work.

The prize originated in 1935 as a traveling fellowship, intended to provide a Grand Tour experience to exceptional recent GSD graduates at a time when international travel was rare. In 2013, the GSD opened the prize to early-career architects worldwide to encourage new forms of prolonged, hands-on research and cross-cultural engagement.

The winner will be selected via an open call for proposals and a rigorous review process. The winner of the Wheelwright Prize will receive:

The deadline for applications is February 9. (Please note that the deadline has been extended beyond the originally announced deadline of January 30.) The winner of the 2015 Wheelwright Prize will be announced in mid-April.

Visit the Official Webpage of the 2015 Wheelwright Prize

The Blockchain Bootcamp 2021 for early to mid-stage startups in Africa.