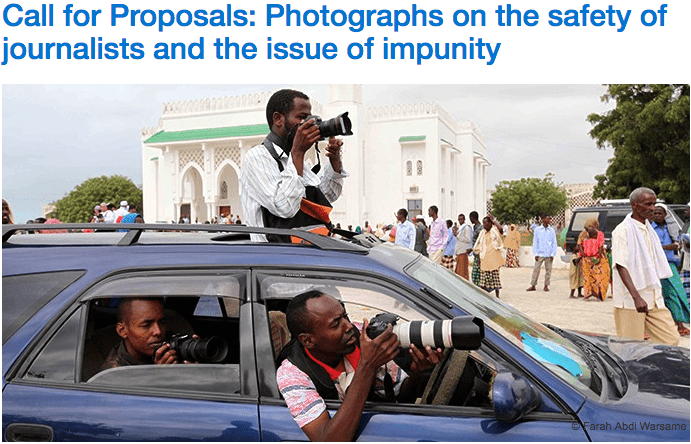 UNESCO is inviting professional photographers from all over the world to send a sample of their best photographs illustrating journalists while doing their job and in particular on the issues of the safety of journalists and impunity for crimes against them.

UNESCO is looking for images that illustrate journalists working in different situations, for example, international and/or local journalists covering demonstrations, trials, major public events, investigations on corruption, citizen journalists, journalists  embedded with police or the military, journalists reporting from a conflict zone, journalists in protected vehicles or in front of media houses with protection or any other case in which journalists, including women reporters, are at work in sensitive situations.

As the United Nations agency with a specific mandate to promote “the free flow of ideas by word and image”, UNESCO aims to promote freedom of expression and its corollary of press freedom, to reinforce journalists’ safety and tackling impunity, in the framework of the United Nations Plan of Action on The Safety of Journalists and the Issue of Impunity. The safety of journalists and combatting impunity are central elements to support freedom of expression and press freedom. On average, every four days a journalist is killed for bringing information to the public. Over the last 10 years, 827 journalists have been killed according to UNESCO statistics.

Proposed photographs can be send to Michelle Salomons: [email protected].

Visit the Official Webpage of the UNESCO Call for Proposals: Photographs on the safety of journalists and the issue of impunity