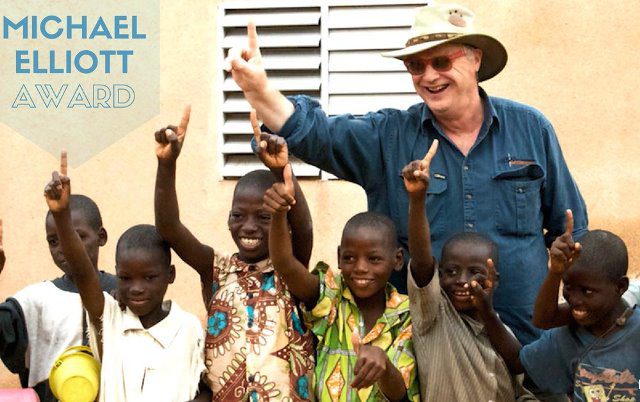 The International Center for Journalists (ICFJ) in collaboration with ONE and the Elliott family seek entries for the 2018 Michael Elliott Award for Excellence in African Storytelling. In its second year, this prestigious award will honor an up-and-coming journalist in Africa who tells important stories through quality reporting.

Mike served as a distinguished editor at The Economist, Newsweek and Time before becoming CEO of ONE. Last year, he had spoken of his dream to establish an award that would bring together his belief in great journalism with his commitment to progress in Africa.

This award, given in Mike’s name, will provide the winner a $5,000 cash prize to pursue an in-depth reporting project. In a special study tour organized by ICFJ, the winner will spend time in U.S. newsrooms to learn new skills and share knowledge. In order to take full advantage of the study tour, applicants must speak English, even if they work in another language.

Our inaugural award winner Mercy Juma, a Kenyan broadcast journalist whose stories highlighted sensitive topics, such as unwed teen mothers living in Muslim communities, was selected from among 354 applicants. Her reporting brought to life the stories of often-voiceless Kenyans who face difficult human challenges and aim to overcome them.

In her award-winning story, “Teen Mums of Kwale,” she tells of primary school girls whose families make the controversial choice to let them use contraceptives even though the practice is taboo in the Muslim communities of Kenya’s Kwale County. The reason for going against tradition: Their unmarried girls need schooling, not more unwanted pregnancies, if they are ever to rise out of poverty.