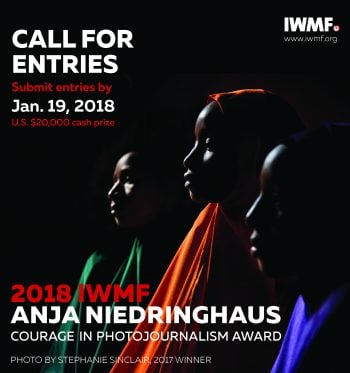 The Award includes a cash prize of $20,000. As part of the IWMF’s partnership with World Press Photo Foundation, the 2018 Award winner will be announced publicly and have her work showcased at the World Press Photo Festival of Visual Journalism in April 2018.

The IWMF’s Anja Niedringhaus Photojournalism award celebrates women photojournalists for work that inspires us to take action and better understand the world. This courageous reporting manifests in many different forms. We believe that courage is reflected in everyday life beyond the frontlines of conflict, and we seek candidates whose work reflects the values of Anja Niedringhaus through compassion, humanity, and a commitment to capturing the whole picture.

Created in 2014 with a $1 million gift from the Howard G. Buffett Foundation, the Award will be given annually to a woman photojournalist whose work reflects courage and dedication, as Anja’s does.

The Award winner will be publicly honored at the World Press Photo Festival in April 2018, have her work exhibited and will receive a cash prize of $20,000