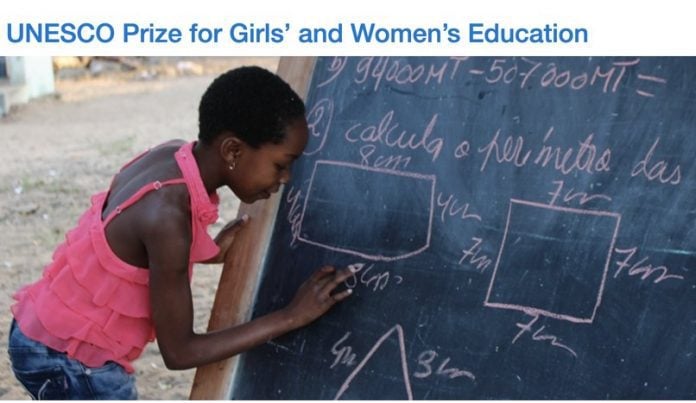 Gender equality in education is a basic right and a prerequisite to build inclusive societies. Although notable progress has been made over the last 20 years, 16 million girls will never set foot in a classroom (UNESCO Institute for Statistics).

The UNESCO Prize for Girls’ and Women’s Education honours outstanding and innovative contributions made by individuals, institutions and organizations to advance girls’ and women’s education. It is the first UNESCO Prize of this nature and is unique in showcasing successful projects that improve and promote the educational prospects of girls and women and in turn, the quality of their lives.

Funded by the Government of the People’s Republic of China, the Prize is conferred annually to two laureates and consists of an award of US $50,000 each to help further their work in the area of girls’ and women’s education. The Director-General of UNESCO awarded the Prize for the first time in 2016.

On International Women’s Day, UNESCO launched the call for nominations for the 2020 UNESCO Prize for Girls’ and Women’s Education. The Prize awards US$ 50,000 annually to two laureates making outstanding efforts in favour of girls’ and women’s education.

Nominations must meet the eligibility and selection criteria set by the Prize. Nominated projects must be established and running for at least two years, show potential to be replicable and scalable, and contribute to one or more of the priority areas of the Prize. An independent International Jury of five experts will assess nominations on the basis of the project’s potential for impact, innovation and sustainability.

Consult the selection process webpage of the Prize to learn more.

Nominations must be submitted in English or French via an online platform, accessible only to Permanent Delegations to UNESCO and NGOs in official partnership with UNESCO.

Based on the recommendations of the Jury, the Director-General of UNESCO will announce the 2020 laureates who will receive the award at an official ceremony on 11 October 2020 as part of International Day of the Girl Child celebrations.

Established in 2015 and funded by the Government of the People’s Republic of China, the Prize honours outstanding and innovative practices advancing girls’ and women’s education. It consists of two US $50,000 awards to help further the work of laureates in this field.

McKinsey African Leaders on the Move Event 2021 for young Africans.