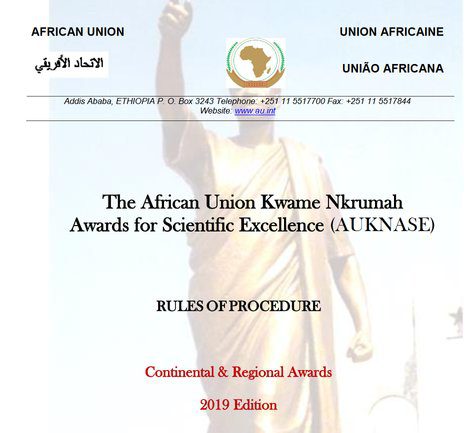 The African Union Commission is committed to ensure that science, technology and innovation contribute to our sustainable development efforts. The Constitutive Act, establishing the African Union, recognizes the need to advance the development of Africa by promoting research in all fields, and in science and technology in particular.

The Commission, through its Department of Human Resources, Science and Technology implements a strategic science and technology development programme through the Science, Technology and Innovation Strategy (STISA-2024), aimed at contributing to the wellbeing and improved quality of life for the African citizens as articulated in the African Union Agenda 2063. In January 2007, the AU Heads of State and Government “declared 2007 as the launching year for building constituencies and champions for science, technology and innovation in Africa”.

AUKNASE reflects and underscores a success story and the critical role of science and technology in the development and integration of Africa. Under this programme prizes are awarded to top African scientists in each of the following two sectors   (a) Life and Earth Science and innovation; and (b) Basic Science, Technology and Innovation at the national, regional and continental levels.

1. Continental Level where two awards of USD 100,000 are given to African pioneer scientists

2. Regional Level where two African women scientists per each of the five geographical regions of Africa are given USD 20,000 each, and

3. National Level dedicated to young African researchers, where two prizes are given per country and the value of the prizes is determined by the African Union Commission

Nominations (on the on-line system …..)will be invited from any institution in the continent, from universities, research institutions, professional bodies, academies, industrial establishments, and so on.

Nominations may be received from:

individuals who may be senior individuals of the same or higher rank than the nominee;3.1.2.2Heads of institutions who may have their own formalized procedure for nomination, chairpersons of committees who review the achievements of scientists in their institutions;

The nominator is required to show the importance and impact of the researchof the applicant. The focus will be on the quality of the work and not necessarily the number of publications.

The nominator should provide a narrative presentation (up to five pages)of the importance, relevance, quality and impact of the work. A full CV as well as 5-10 copies of best publications are to be submitted together with the Nomination Form.

All successfully completed nominations on the will be automatically acknowledged