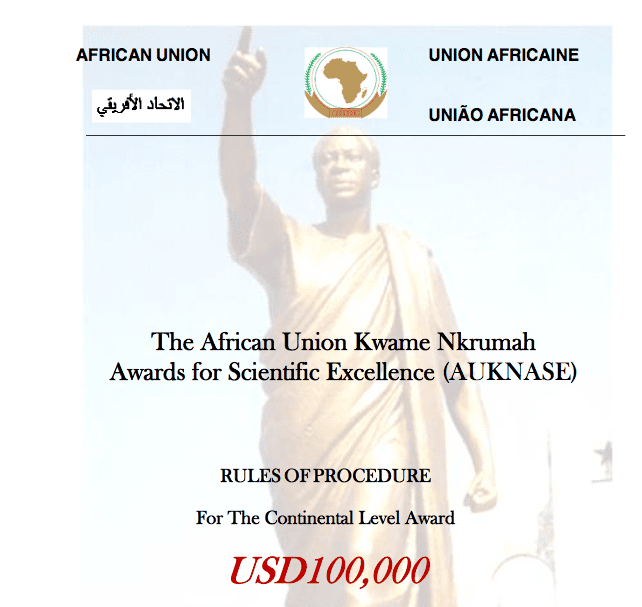 The Commission of the African Union is committed to support the use and development of science in Africa and has, since 2008 been running the African Union Kwame Nkrumah Awards for Scientific Excellence (AUKNASE).

These awards are in memory of the Great Pan-Africanist and First President of the Republic of Ghana, Dr. Kwame Nkrumah, a firm believer in African liberation and unity! A man who pursued a revolutionary pan-African policy, with a strong vision extending beyond national boundaries, for the creation of a new Africa, “a federal union of African states”. He is among the key founding fathers of the then Organization of African Unity in 1963, an important pan-Africanist organization, which later become the African Union in 2002.

Today the “dream and determination” of Dr. Kwame Nkrumah inspires Africa in all facets of development. The AUKNASE programme is implemented at national level for young researchers, regional level for women scientists and continental level open to all scientists. The Continental level is the highest level of the programme. The objective is to give out scientific awards to top African scientists for their scientific achievements and valuable discoveries and findings.
This form is to be used to nominate suitably qualified candidates for the Continental Awards for the 2017 Edition.

APPLICATION for the CONTINENTAL PRIZE:
Applicants should have nominees with a PhD degree, if the nominee is an Academic in a university must at least have a rank of Associate Professor.
There is no age limit for this award.
The nominee should meet at least four of the following:
Nominations