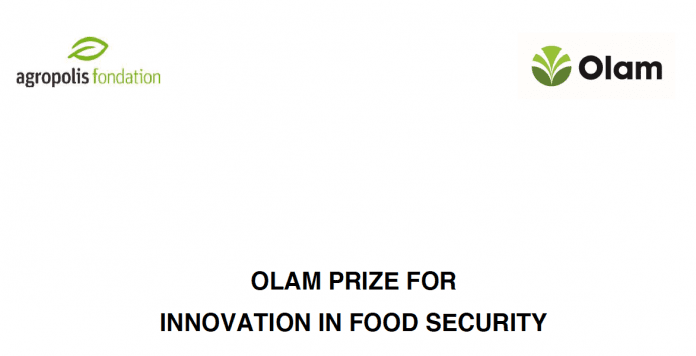 This year Agropolis Foundation has launched the second edition of Olam Prize for Innovation in Food Security in partnership with global agri-business Olam International, which will be judged and awarded in conjunction with the fourth edition of the Agropolis Louis Malassis International Scientific Prize for Agriculture and Food.
Olam International is a leading agri-business operating across the value chain in 70 countries. From first procuring cashews in Nigeria 26 years ago, Olam has evolved to have a direct sourcing and processing presence in most major producing countries in the Northern and Southern hemispheres, and now holds leadership positions in many of its businesses including rice, cocoa, coffee and edible nuts.

The Olam Prize for Innovation in Food Security (hereafter referred to as ‘the Prize’) aims to recognise an outstanding innovation for its potential impact on the availability, affordability, accessibility and adequacy of food. The Prize will support the innovation’s further development and contribution to global food security, in support of the UN’s Sustainable Development Goal #2: End hunger, achieve food security and improved nutrition, and promote sustainable agriculture.

The Prize will be given to a research project for an outstanding innovation with a significant impact on food security focusing on any region, environment, crop or part of the supply chain.