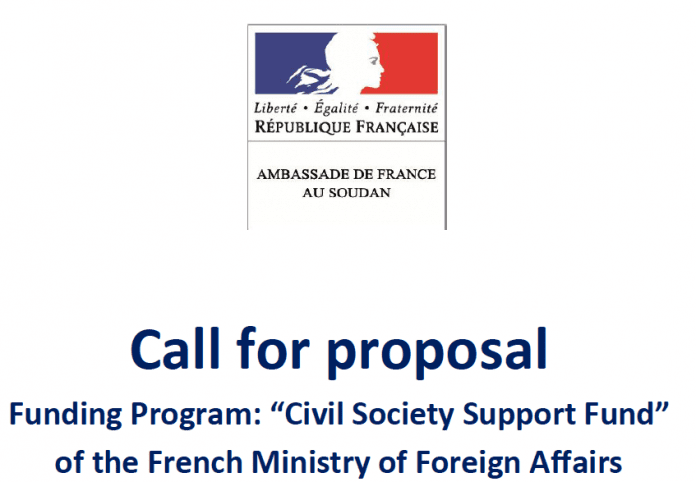 The French Embassy is opening a second call for proposals for the year 2016-2017 for the French Civil Society Support Fund in Sudan.

Set up by the French Ministry of Foreign Affairs (MFA), the Social Fund for Development, implemented in Sudan since 2002, has evolved to become in 2014 the “Civil society support fund”.
This new fund is aimed at empowering civil society’s organizations by a two-track approach which consists in:

For the 2016-2017, the French Embassy will give priorities to local NGO’s working on issues of prevention, protection, and response to gender-based violence (GBV).
Proposals might include among others:

The concept note should be filled in French or English and sent to the Humanitarian and Civil Society Project Officer of the French Embassy as soon as possible and before Thursday 10th September 2015, at midnight the latest: [email protected]
or in hard copy addressed in an envelope to:
Humanitarian and Civil Society Project Officer
SCAC- French Embassy to Sudan
Street 13 – Amarat
Khartoum

The Duke-UNICEF Innovation Accelerator Program 2021 for impact enterprises across Africa.

Between the Lines International Writing Program 2021 for young Aspiring Writers.