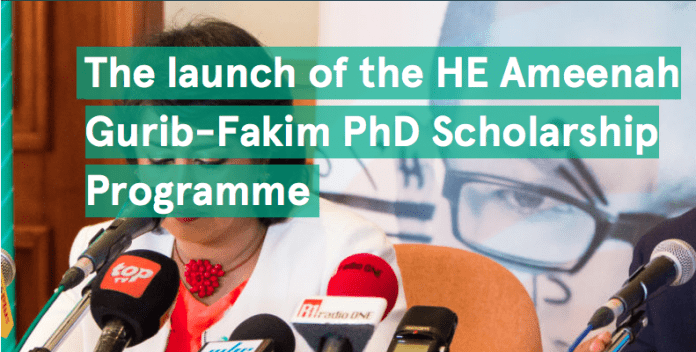 The Planet Earth Institute (PEI), an international NGO and charity working for the scientific independence of Africa, have announced the creation of the Her Excellency Mrs Ameenah Gurib-Fakim PhD Scholarship programme. The PhD scholarship programme is a PEI and Bill and Melinda Gates Foundation (BMGF) initiative in partnership with the African Academy of Sciences (AAS).
HE Dr. Ameenah Gurib-Fakim, is the President of the Republic of Mauritius, and Vice Chairman and Trustee of the Planet Earth Institute
The Programme will begin with 10 full PhD research grants for Mauritian researchers (or African researchers studying in Mauritius). Following the pilot 10 grants, the Programme is aiming to expand across Africa to award 10,000 PhD Scholarships in the coming decade in the areas of water, energy, agribusiness, health and blue sky research. The PEI and the BMGF hope that the areas of focus will help to equip Africa with the critical mass of scientific leaders it needs to become a continent of knowledge-based, sustainable economies.

The grants awarded to the initial ten researchers will cover the entire duration of the PhD, and will include both the full cost of academic and research time required at host universities, as well as a generous living expenses stipend. The scholarship winners will be announced by 1st July and the research placements will be intended to begin in September 2016.

To be eligible for the initial ten research scholarships, candidates must be:

Each grantee will benefit from time spent at both a host university in Africa and in the United Kingdom, as well as placements within industry. The areas of research eligible fir the scholarship are those we believe will underpin the sustainable development of Africa, and boost the capacity of local scientists to answers the great challenges ahead. They are:

The grants awarded to these initial ten researchers from Mauritius will cover the entire PhD duration, and will include both the full cost of academic and research time required at host universities, as well as a generous living expenses stipend.

Applications are now open (as of 6th May 2016) and will close on the 31st May 2016. The final scholarship winners are expected to be announced in early July 2016, with a public event held in Mauritius shortly after. Research placements are expected to begin from September 2016.