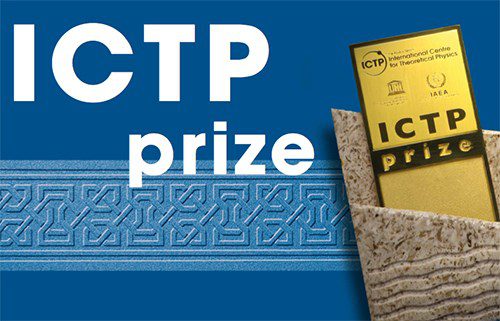 ICTP is now accepting nominations for young researchers from developing countries for the 2020 ICTP Prize.

The prize recognizes outstanding and original contributions to physics and includes a sculpture, a certificate, and a cash prize. Past winners include Ashoke Sen (1989), the Indian theoretical physicist who was awarded the 2012 Fundamental Physics Prize, and former ICTP Director Fernando Quevedo (1998).

Anybody can nominate a candidate for the ICTP Prize. In order for a candidate to be considered, ICTP needs the following essential information:

It would greatly help the selection work, and make it more accurate, if you could provide us with additional information on:

Self nominations are acceptable.

Please submit your nomination, along with a signed and dated cover letter, by 30 September 2020 in one of the following ways:

Completed nominations–which must include a signed and dated cover letter–can be submitted in one of the following ways:

Visit the Official Webpage of the ICTP Prize 2020