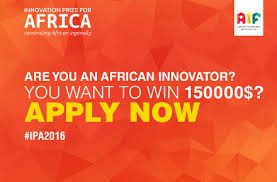 If your answer is yes to the above, then you’re invited to participate in the Innovation Prize for Africa (IPA) 2016 competition. The IPA is an initiative of the African Innovation Foundation (AIF) that was established in 2011. It aims to mobilize African innovators and entrepreneurs by providing US$ 150 000 for market-oriented solutions that support African-led development. Through the IPA, the AIF acknowledges and encourages the endeavours of African innovators and entrepreneurs, and works to raise their profiles on the development agenda.  Each nominee also receives a voucher of US$ 5000 to further develop their innovations.

The IPA 2016 edition, dubbed “Made in Africa” is in harmony with the AIF mission that seeks to catalyse the innovation spirit in Africa, living up to its credo: by Africans, for Africa. Now in its fifth year, IPA is the most celebrated innovation event on the African calendar, bringing together the best of African ingenuity in the rigours of science and technology, environment and energy, agri-business, health and well-being, the manufacturing and service industry, as well as the ICT sector.

Now in its fifth year running and a cash investment sum of $820 000, the IPA program has engaged, inspired and transformed more than 3000 movers and shakers across the continent, supporting more than 35 star innovators in 49 countries

Apply Now for the Innovation Prize for Africa 2016