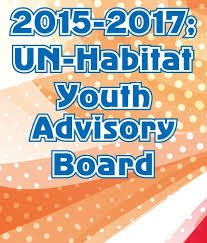 UN-Habitat is now inviting young people between the ages of 16 to 32 from around the world to vote for their representatives for the 2015-2017 UN-Habitat Youth Advisory Board.

The Youth Advisory Board is a youth consultative body that advises UN-Habitat on strategies to engage young people in sustainable urban development.

Now in its fourth term, the board constitutes 14 members with equal gender representation for each region. The online voting invitation follows an initial call for nomination made through the UN-Habitat website in February 2015 that attracted over 600 strong applicants.

These applications were reviewed by the Board’s Review Committee at UN-Habitat who narrowed down to the selected 60 candidates to be included in the online voting process.