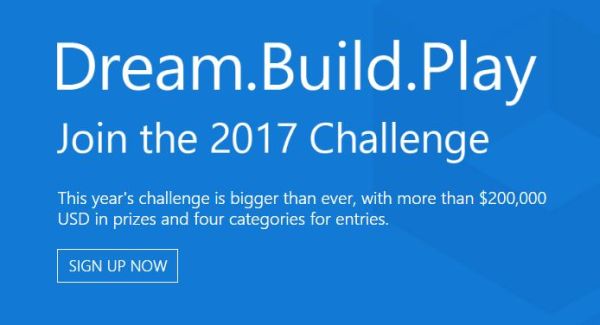 The Dream.Build.Play 2017 Challenge is pushing game makers to maximize their creativity and create experiences that engage gamers from across the world. This competition is open to all creators, working solo or in teams of up to seven. Create a Universal Windows Platform (UWP) game for one of the categories below by December 31, 2017, and you’ll have a chance to win cash prizes and share your game with the world.

The 2017 Challenge is a skilled-based contest looking for the latest and greatest UWP games from the indie developer community. Go solo or assemble a team of up to 7 members (including you) to create your game and enter it in one or more of the following categories: PC game, Console game, Mixed reality game and Cloud-powered game. Submit your game starting on August 9 to compete for cash prizes of more than $200,000 USD.

Are at least 18 years old

Build a game that uses Azure Cloud Services on the backend, like Service Fabric, CosmosDB, containers, VMs, storage, and Analytics. Judges will give higher scores to games that use multiple services in creative ways-and will award bonus points for Mixer integration.

Create a Windows 10 game using whatever technology you prefer—even middleware like Unity, Cocos, and GameMaker—and publish it to the Windows Store. Using Windows 10 features like Cortana or Inking will give your game an advantage with the judges.

Create an immersive mixed reality experience that lets players interact with 3D volumetric content in a virtual space. Use whichever tools you prefer (like Unity) to build as long as your game uses Windows Mixed Reality. Judges will prefer games that incorporate audio content.

Build a UWP game for the Xbox One console family and incorporate the Xbox Live Creators Program with at least Xbox Live presence. Extra consideration will be given to games that incorporate Xbox Live services like leaderboards and statistics.

Visit the Official Webpage of the Microsoft Dream.Build.Play 2017 Challenge