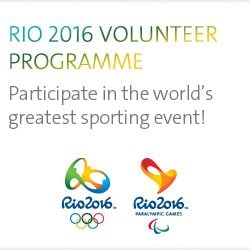 Application Deadline: November 15 2014
When : The Olympic Games will be held between 5 and 21 August 2016.
The Paralympic Games will take place between 7 and 18 September 2016.The Rio 2016 Volunteer Programme is your opportunity to be part of the biggest sporting event in the world. A number of diverse activities will be taking place in four regions of Rio de Janeiro – Barra, Deodoro, Maracanã and Copacabana – and there will also be positions in the football cities (São Paulo, Brasília, Salvador and Belo Horizonte). This is a unique opportunity that will provide not only personal and professional development, but also close interaction with people from all over the world.
In 2016, a group of 70,000 volunteers will help stage the Olympic and Paralympic Games in Rio de Janeiro. In order to be part of this group, you will be guided along a journey of approximately two years, during which time you will discover the best role to match your profile.

There are dozens of possibilities, from helping at airports and ceremonies, to being a photographer’s assistant or camera operator. Since we want to avoid anything getting in the way of your work during the event, we are preparing our venues with everything you will need. helping with many of the activities that will be carried out in Rio de Janeiro and cities hosting football matches. Volunteering will also benefit you by enriching your CV, expanding your network, and giving you the chance to meet people from different cultures. You will also be able to enjoy exclusive training courses that will be provided for selected candidates. Do not miss out on this great opportunity to participate and make the history of the Olympic and Paralympic Games part of your own life’s history

To be part of the Rio 2016 Volunteer Team,you need to:

What types of documents will i need to complete the form? How will the selection process work?