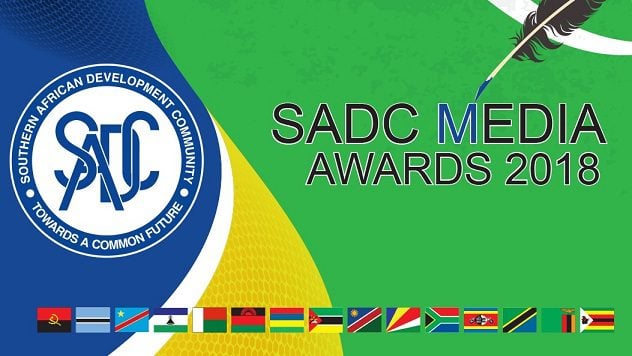 In 1995 the SADC Council of Ministers approved the establishment of the SADC Media Awards to recognise best media work in the region. Since 1996 the SADC Secretariat has been coordinating the Media Awards to encourage the media in the Region to play a leading role in disseminating information on SADC in order to support the process of regional co-operation and integration.

The SADC Secretariat now is pleased to announce the 2018 SADC Media Awards Competition. The Awards are in the fields of Print Journalism, Radio Journalism, Television Journalism and Photo journalism.  Prospective entrants are invited to submit their entries accompanied by proof of their nationality to the National Adjudication Committee (NAC) in their respective Member States.

b) The themes of the entries to be submitted for the competition must be on issues and activities promoting Regional Integration in the SADC region, i.e. infrastructure, economy, water, culture, sports, agriculture, etc.

c) All media practitioners who are SADC nationals may enter the competition, except those in institutions contracted by SADC and the SADC Secretariat staff;

d)  All works entering the competition should be in one of the SADC working languages, i.e. English, Portuguese, French and any national indigenous language of the SADC Region and should be submitted together with the transcript in one of the three SADC working languages, i.e. English, French and Portuguese. These should be published/broadcast (newspaper cutting, websites, magazines, audio CDs, USB and newsletters;

e)   Entries are invited from the following categories:

•    Print Journalism submissions should have a minimum of 100 (one hundred words and a maximum of 2000 (two thousand) words.

•     Photographic entries should have one (1) photo, or a pictorial spread of not more than twenty (20) photos published in one issue/edition. Each entry must be accompanied by an original newspaper in which photo (s) were published.

f) All entries must be submitted to the National Adjudication Committee not later than February 27, 2018.

g) All submissions must be made strictly on the SADC Media Award Entry Form and should contain full contact details of the entrant, including, passport-sized photograph, physical address, telephone and, where applicable, fax number and e-mail address;

For More Information:
Visit the Official Webpage of the SADC Media Awards Competition 2018