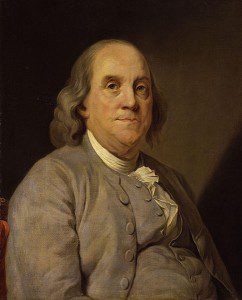 Benjamin Franklin is one of history’s great figures. While he made lasting contributions in many fields, his first passion was writing. He believed in the power of the written word as the bedrock of a democratic society, to inform, and stimulate debate .

Each year a question or quote exploring Franklin’s relevance in our time is open for interpretation in 1000-1500 words. The competition is exclusively for young writers, aged 18-25, with a first prize of £750, and a second prize of £500. Winning entries will be posted here and also published online by media partner, The Telegraph  and at www.BenjaminFranklinHouse.org

Each year a question or quote exploring Benjamin Franklin’s relevance in our time is open for interpretation in 1000-1500 words. .

The Franklin quote for interpretation in 2013 is: “Dost thou love life? Then do not squander time, for that is the stuff life is made of.“ Entrants should interpret this quote for its significance today. All entries must be received before 31 October 2013.
For nearly sixteen years between 1757 and 1775, Franklin lived at 36 Craven Street in the heart of London, England. He is one of history’s great polymaths – a diplomat, patriot, scientist, inventor, philosopher and more. He was one of the first American journalists, writing prolifically not only on politics and foreign affairs, but on science, the arts and s ociety. In 2006, Benjamin Franklin House, the world’s only remaining Franklin home, opened to the public
for the first time as a dynamic museum and educational facility. For more information see www.BenjaminFranklinHouse.org.
Submissions
* Entrants must be aged 18-25 years Entries of 1000-1500 words must be sent by 31 October 2013 to [email protected]
. Each entrant is asked to provide their name, email, postal address, and telephone number. In addition, entrants should provide their age and place of study (if applicable; if they are not currently in education, they should provide a biographical note explaining their current activities.) Entrants may submit only one entry; fiction or non-fiction accepted.