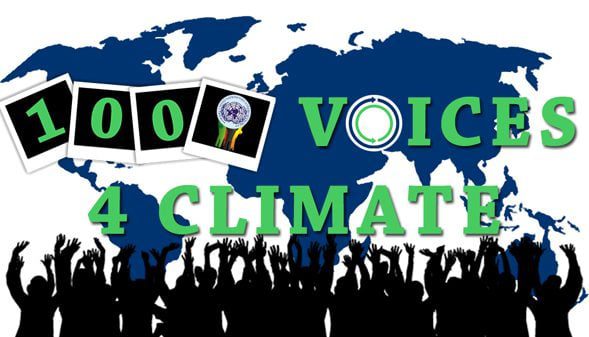 Do you desire to have your voice represented in Paris? Do you crave to take part in the global negotiation for actions against Climate Change?

Then, this is an exciting opportunity for YOU to take part in one of the largest online Climate Mobilization with the Model United Nations Volunteers Network (MUN-VoN) Nigeria, in collaboration with the international organization Care About Climate, Inc. Win $300 and get your voice represented at the 2015 International Conference of Youth on Climate change in the #1000Voices4Climate International Photo Contest.

‘#1000Voices4Climate’ Photo Contest is A Social Media Advocacy Project that presents a unique and strategic opportunity through which young men and women can VOICE their opinions about our climate.

You will contribute to the various key points in the ongoing discussions and negotiations anticipated during the 21st Conference of Parties of the United Nations Framework Convention on Climate Change.You will become part of a program through Care About Climate, an international non-profit organization focused on climate change education and advocacy. Utilizing the Climate Symbol as a platform for discussion, you will be an advocate for our climate.

The Goal of this Contest will be to

1. Promote the awareness and increase the knowledge of young people across the globe about Climate Change and COP 21.

2. Gather and communicate key messages from young people to influence International negotiations and commitments in the build up and during the COP 21.

4. Gather the voices and images of 1000 youths or more from across the World and then summarize our hopes and aspirations into A Video Documentary that will be presented at COY 11(Conference of Youth on Climate change) and through Care About Climate’s media in the build up to the COP 21.

5. Foster an ongoing partnership with Care About Climate that may extend to future projects and programs.

1. $300 prize for the Best Photo Message with the highest number of votes as voted from across the Globe.

3. Chance to Be Among the Best 1000 that will be showcased in a video documentary at the International Conference of Youth on Climate change.

4.Publication of the Best 100 Picture Messages on the Care About Climate Website.

To show they care about Climate, Youths take part in this by:

1. Simply take a photo of yourself with a Placard bearing a message saying what YOU think world leaders should do to prevent climate change.

3. Encourage your friends to Vote for your picture as the best message on the Care About Climate Facebook Photo Contest Page.