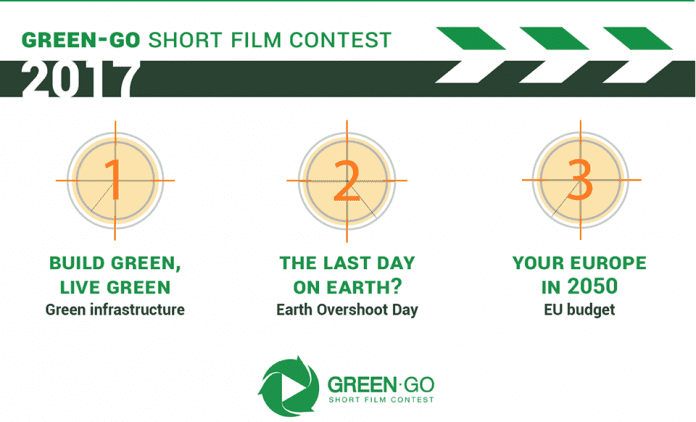 The Green-Go International Short Film Contest aims to gather environmentally and socially conscious individuals to act for the environment!

You care about nature? You want to be a part of a solution to challenges? You feel creative?

Get inspired, find a story, do your research, get your team together, grab your camera and go outside to make your short film now! Send your film by 22nd October 2017.

The winners of each of the three categories will be decided by a jury by 23 October. Please be aware if any of the criteria mentioned above is not met, we will not accept the application!

Winners will be notified by email, information will also be available on greengofest.eu on 23 October 2017 after closing the public award voting.

The films will be evaluated by a jury consisting of film professionals and NGO members. In each category, the jury will announce ONE winner on 23 October 2017.

Online voting for the audience award winner will start on 5 October 2017 – the submitted short films will be available on the www.greengofest.eu and visitors will be able to vote for their favorite ones. The voting ends on 22 October 2017 and the winner will be announced on 23 October.