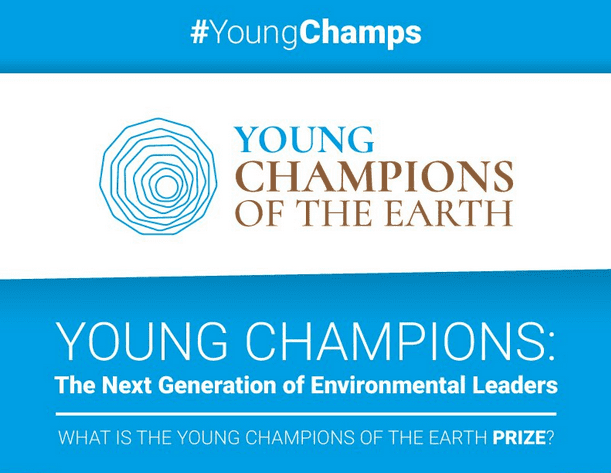 Each year, six young people – one from each global region – will be named Young Champions of the Earth. These winners receive seed funding, intensive training, and tailored mentorship to help them bring their big environmental ideas to life.

If you have a big idea to protect or restore the environment; if you have a vision for a more sustainable future; if you have a strong track record of instigating change; if you are unafraid of failure; and if you believe in a bright future for our planet, then you just might have what it takes to become a Young Champion of the Earth.

Six Young Champions of the Earth are selected every year, one from each global region (Africa, Asia-Pacific, Europe, Latin America and the Caribbean, North America, and West Asia). Each winner receives the following: More than just a prize-giving scheme, Young Champions of the Earth aims to nurture the next generation of environmental leaders. Through our networks and partnerships, we connect Young Champions with business leaders, scientific innovators, national-level policymakers, and United Nations experts, among many other communities.

In making these connections, we help young people with extraordinary potential put their big ideas into action. We also increase their potential to do amazing things throughout their lives.

The Young Champions of the Earth corporate partner, Covestro, is a key source of both mentorship and hands-on project assistance. The company’s 16,000 global staff members stand ready to support the 30 Young Champions finalists on topics ranging from project planning to budgeting to the innovation process itself.

In the first stage of the selection process, all applications will be judged by Regional Juries according to the following criteria: