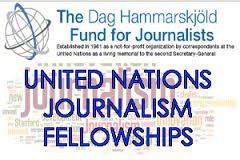 The Dag Hammarskjöld Fund for Journalists is now accepting applications from professional journalists from developing countries for its 2014 fellowship program.

The fellowships are available to radio, television, print and web journalists, age 25 to 35, from developing countries who are interested in coming to New York to report on international affairs during the 69th session of the United Nations General Assembly.

The fellowships will begin in early September and extend to late November and will include the cost of travel and accommodations in New York, as well as a per diem allowance.

The Dag Hammarskjöld Fund for Journalists fellowships are open to individuals who:

Visit the Official Webpage of the Hammarskjöld Fellowship Fund for Journalists