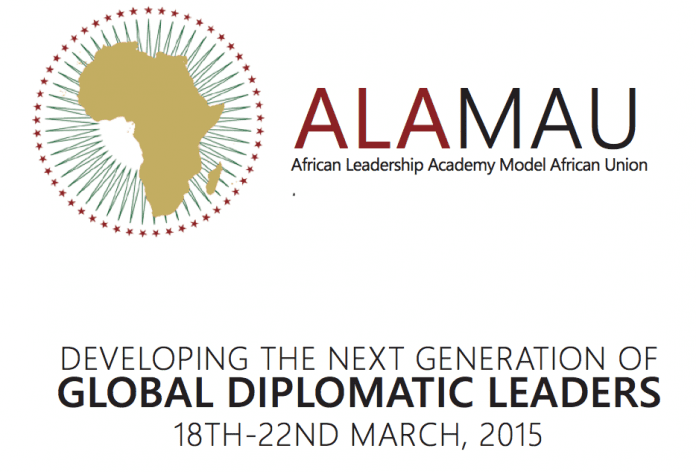 Whom: Participation at ALAMAU 2015 is open to high school students aged 15-19 from all regions of Africa and around the world.

African Leadership Academy Model African Union (ALAMAU) is a simulation of the African Union (AU), providing a platform for young leaders from around Africa and across the world to explore the inner workings of the AU, and to practice international diplomacy by assuming the roles of African leaders.
This conference affords delegates the opportunity to study complex African issues, understand the political, economic and social interests of African countries, engage in public speaking and learn to successfully negotiate without compromising national interests. ALAMAU aims to empower young leaders to model international cooperation while celebrating diversity and promoting pan-African unity.
ALAMAU 2015 will be held from March 18-22, 2015 as young leaders attempt to resolve, in five days of intense brainstorming and negotiations, some of the longest-running and most complicated issues on the continent.
African Leadership Academy (ALA) seeks to transform Africa by developing a powerful network of over 6,000 leaders who will work together to address Africa’s greatest challenges, achieve extraordinary social impact and accelerate the continent’s growth trajectory.
ACTIVITIES AT ALAMAU 2015
Committee Sessions
At ALAMAU 2015, seven organs and subsidiary bodies of the African Union will be simulated. Each
committee session will last for three hours and will mainly include speeches and caucus negotiations, ultimately culminating in a resolution drafted to solve the issue for which the committee was convened
Diplomatic Reception & Roundtable
Delegates to ALAMAU 2015 will be drawn from several countries within and outside Africa; therefore as part of their diplomatic experience at ALAMAU, they will be afforded the opportunity to interact with and
learn from several African ambassadors in a cocktail reception.
Faculty Advisor Speaker Series
Each delegation to ALAMAU 2015 will be accompanied by a faculty member, who might be a teacher in the humanities or one who maintains significant interest in international affairs
Educational Tours
South Africa is home to several historic and educational sites including the Apartheid Museum and Cradle of Humankind.
Cultural Night
Considering the diversity of nationalities and cultures that will be represented at ALAMAU, delegated will be engaged in a celebration of all represented cultures at the Africa-themed Cultural Night. Participants will witness a fusion of music, food, fashion, dance, drama and poetry that highlight the uniqueness of different cultures from all regions of Africa
HOW TO PARTICIPATE AT ALAMAU 2015