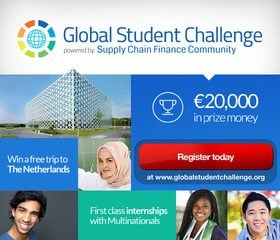 The Global Student Challenge offers EUR 20,000 in cash prizes, internships at major corporations and the top 20 national teams will be invited to the Grand Final in Netherlands

The Global Student Challenge is introduced by the Supply Chain Finance Community to create awareness on- and stimulate development in the topic of Supply Chain Finance. This challenge aims at identifying the best student talents and connecting them to the corporate sector.

The Global Student Challenge aims to stimulate and improve the interaction between the corporate/banking sector and knowledge institutions.

The Contest prizes per team

The National Winners participating to the Grand Finale will have the chance to be enrolled into International Internships with the major sponsors of The Contest.

How to participate in the Global Student Challenge?

In order to participate, you need to form a team of four full-time students in your final or pre-final year of studies and approach a professor at your school. The professor needs to endorse your team for the Challenge.

National Rounds (Qualification)
Professors may decide on the selection criteria for the 2 representing teams (academic performance of the team members or a competition at university/ national level). From June 2 to October 21 in which endorsed student teams have the opportunity to qualify for the Global Rounds (Competition).

Visit the Official Webpage of the Global Student Challenge