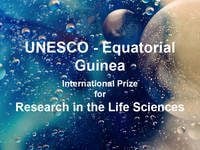 The purpose of the UNESCO–Equatorial Guinea International Prize for Research in the Life Sciences is to reward the projects and activities of an individual, individuals, institutions, other entities or non-governmental organizations for scientific research in the life sciences, which have led to improving the quality of human life. The Prize encourages research as well as the establishment and development of networks of centres of excellence in the life sciences.

Candidates shall have made significant research contribution to the life sciences to enhance the quality of human life. The prizewinner(s), maximum three, shall be selected by the Director-General of UNESCO on the basis of the assessments and recommendations made to her by an international jury.

Nomination of Candidates
1. Nominations for the Prize must be submitted to the Director- General:
(a) by the governments of UNESCO Member States, in consultation with their respective National Commissions; or
(b) by non-governmental organizations maintaining official relations with UNESCO and active in relevant fields covered by the Prize.
Award of the Prize
The Prize amount may be divided equally among a maximum of three laureates, each of whom is considered to merit it. If a work being awarded has been produced by two or three persons, the Prize amount shall be awarded to them jointly. In no case may a Prize amount be divided between more than three persons.
Nomination
(a) the nomination form, duly completed (see attached form);
(b) a summary of the work/research, not to exceed 1000 words, including the results of the work/research;
(c) a description of the candidate’s contribution to the Prize’s objectives, not to exceed 1000 words,
(d) a curriculum vitae, including awards received, participation in conferences, symposia, congresses, including mode of presentations (oral/ poster / keynote speaker) or
In the case of institutions, other entities or non-governmental organizations, include the institution’s Statutes, brief history and list of achievements, not to exceed 150 words, as well as ten (10) major publications;
The nominations comprising complete documentation as required applications must reach the
Natural Sciences Sector,
UNESCO,
1 rue Miollis 75732 Paris Cedex 15) before 30 June 2015.
e-mail: [email protected]
For More Information:
Visit the Official Webpage of the UNESCO–Equatorial Guinea International Prize for Research in the Life Sciences