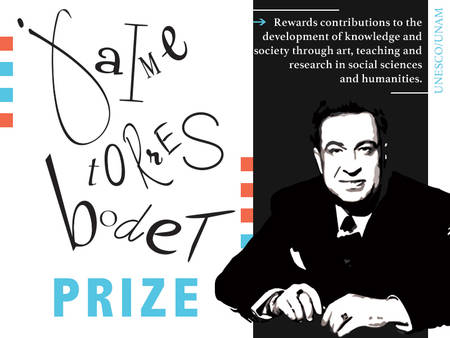 The creation of the Prize was approved on 27 October 2014 by the 195th session of the Executive Board of UNESCO. Awarded every two years, the Prize is intended to reward the efforts of a person, group of people or international institution that has contributed to the development of knowledge and society through art, teaching and research in social sciences and humanities. It is meant to promote pioneering initiatives that may contribute to the development, diffusion and consolidation of the values of humanity.

The Prize was inspired by the life from one of the founding members of UNESCO and Director-General of the Organization from 1948 to 1952. Eminent poet, novelist, essay writer and diplomat, Jaime Torres Bodet was graduated from the National Autonomous University of Mexico (UNAM).  He struggled for international social justice and against illiteracy. He promoted the reconstruction of the educational system, reinforced the importance of the Organization in the world, encouraged the access of women to education, and supported cultural development as a condition for international peace.

The winners of the Prize receive a monetary award of 50,000 US dollars. This Prize highlights the close links between UNESCO and the National Autonomous University of Mexico.

UNESCO invites Members States in consultation with their National Commissions, and non-governmental organizations maintaining official relations with  UNESCO and active in a field covered by the Prize to submit nominations for the UNESCO-UNAM Jaime Torres Bodet Prize in Social Sciences, Humanities and Arts 2017.

Candidates are required to have made an outstanding contribution to the development of knowledge and society through art, teaching and research in the social sciences and humanities. The application file should include (a) the attached nomination form duly completed in English or French; and, (b) supporting documentation on the work carried out by the candidate.

Nominations for the Prize should be submitted, no later than 30 May 2017, by filling out the nomination form in either English or French.

Nominated candidates may be individuals, groups of people or international institutions. No self-nomination will be considered.

Send it, duly signed and stamped, to