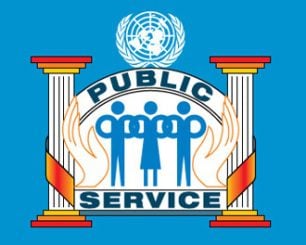 The United Nations Public Service Awards (UNPSA) recognizes excellence in public service at the global level. It was launched in 2003 in order to promote and support innovations in public service delivery worldwide. In 2016, the UNPSA was reviewed in order to be aligned with the implementation of the 2030 Agenda for Sustainable Development and the Sustainable Development Goals (SDGs).
The UNPSA is organized and managed by the United Nations Department of Economic and Social Affairs (UNDESA), through its Division for Public Administration and Development Management (DPADM), in collaboration with the United Nations Entity for Gender Equality and the Empowerment of Women (UN-WOMEN).
The purpose of the UNPSA is to promote and reward innovation and excellence in public services in support of the realization of the SDGs and the principle to leave no one behind, which is at the core of the 2030 Agenda. It takes into account the various levels of development of countries while reflecting the universal nature of the SDGs.
Through a global competition that promotes the role, professionalism and visibility of
public service, the UNPSA aims to:
The Awards
The Awards are usually handed out on 23 June, day designated by the General Assembly as the United Nations Public Service Day to “celebrate the value and virtue of public service to the community” (A/RES/57/277). The General Assembly, in its resolution 57/277, encourages Member States to organize special events on that Day to highlight the contribution of public service in the development process.
The UNPSA Ceremony is part of a United Nations Public Service Forum, which takes place in different regions of the world. In 2018, the Forum will take place in the Kingdom of Morocco.
For further information about this the 2018 United Nations Public Service Forum and past events , please visit DPADM website. In order to ensure a level playing field for nominations from different countries, the winners are decided according to the UN regional groups 2 as follows:

The Award is open to all public sector institutions at the national, state and local levels from all UN member states. In the case of innovative partnerships (including civil society, private sector, academia etc.), the nominee must be a public sector institution;
How to Apply:
Who can nominate?
Public sector institutions (e.g., ministries, Government departments, authorities and agencies; local governments, etc.), schools of public administration; UN agencies (only for initiatives which they have not supported); universities; non-governmental organizations and private sector.
Who can be nominated?
All public institutions at the national, regional/provincial/state, local/municipal/city level from all UN member states are eligible for nomination. In the case of public-private partnerships, the lead nominee must be a public sector institution.
How can nominations be made?
A Nomination can only be submitted through the Online Nomination Form of the UNDESA/DPADM website. Before accessing the online nomination form you are required to reply to some screening questions in order to ensure that eligibility criteria are met. In case you require technical assistance in the process of online submission, please contact the United Nations by email at: [email protected] or phone +1 (917) 367 3004.
The deadline for submitting nominations is 7th February 2018. A few extra days after the deadline will be granted for uploading the supporting documents. The deadline for uploading the supporting documents is 12 February 2018.
For More Information:
Visit the Official Webpage of the 2018 United Nations Public Service Awards