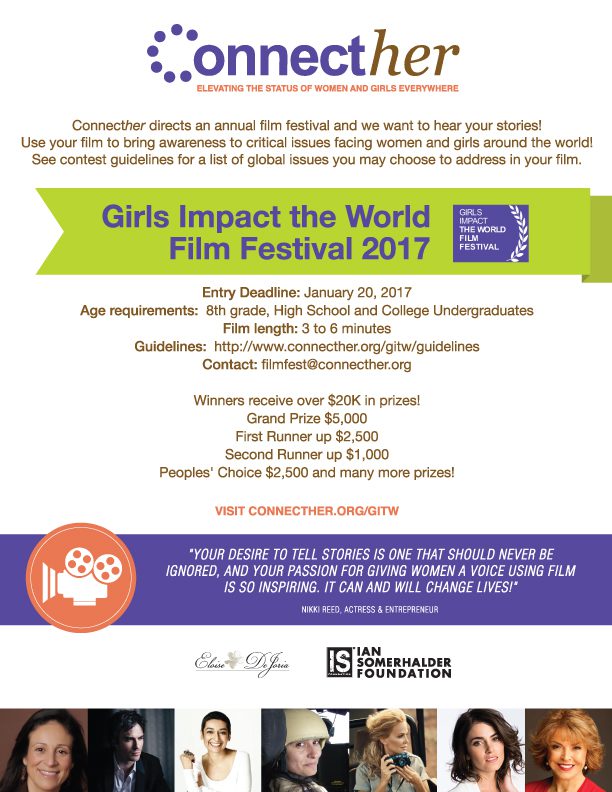 Your films will tell stories about girls and women that raise awareness, envision in film the possibilities of our time for females globally, and propose solutions, all the while providing the young adult voice an outlet in a compelling medium.

Films will:
(1) Raise awareness about current issues affecting women and girls around the world AND/OR (2) Propose solutions to current challenges faced by women

pplicant(s) must be 25 or under on December 31, 2016 (special circumstances may be considered)
(1) Currently enrolled undergraduates (global) OR
(2) Full-time high school students
(3) The GITW Film Fest Competition is not open to any resident of the following countries: U.S. export regulations prohibit the export of goods and services to Cuba, Iran, North Korea, Sudan and Syria. Therefore residents of these countries/regions are not eligible to participate.
(4) Sponsor prizes including Green IS, Honest Beauty & Innovation Prize are chosen by sponsors and may include films directed and produced by graduate students.
(5) Each individual applicant may be involved in the making of up to two films. You may not enter more than two films.

To enter you will need to:
(1) Follow all Film Requirements (see below)
(2) Enter your video on the GITW entry submission page.
(3) Share, share and share your video from the GITW gallery. The more you share, the more likely you will win the People’s Choice Award!
(4) Upon becoming a finalist, before being eligible for prizes, you must provide proof of enrollment at your school/university.
(5) That’s it, wasn’t that easy