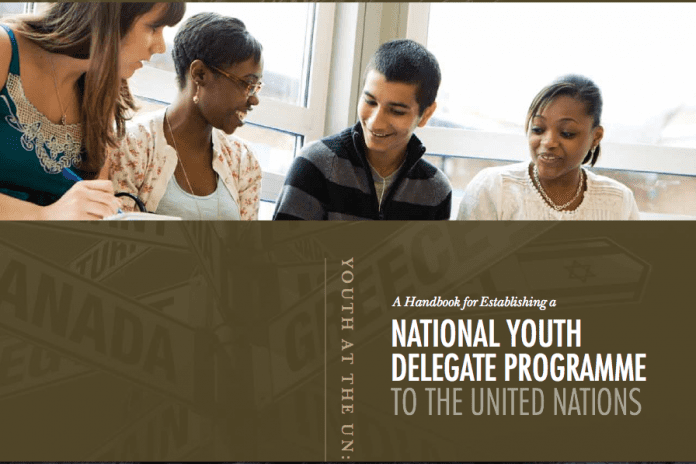 Youth at the UN: A Handbook for Establishing a National Youth Delegate Programme to the United Nations

Does your country have a Youth Delegate to the United Nations?

Find Out How you can establish one!

In celebration of the International Year of Youth in 2010-2011, the World Federation of United Nations Associations (WFUNA), with generous support from the UN Population Fund (UNFPA), launched Youth at the UN: A Handbook for Establishing a National Youth Delegate Programme to the United Nations [PDF], in the hopes that youth and UNAs would use the handbook to lobby their governments to establish a National Youth Delegate Programme.

The World Federation of United Nations Associations (WFUNA) is a global nonprofit organization working for a stronger and more effective United Nations. Established in 1946, we represent and coordinate a membership of over 100 United Nations Associations and their thousands of members.
This free, downloadable Handbook guides young people through the process of developing a proposal and budget for a national Youth Delegate Programme under the guidance of their United Nations Association, as well as taking them step-by-step through creating their own campaign for such a Programme. This handbook includes a number of website and links, including some of the additional resources .
There are several channels for youth participation at the United Nations (UN). This Handbook focuses
on the Youth Delegate Programme. In 1995 the UN General Assembly adopted the World Programme
of Action for Youth (A/Res/50/81) which includes a section on supporting the participation of youth
in decision making, and invites Member States to consider including youth representatives in their national delegations to the General Assembly. This idea has been reinforced through several subsequent
General Assembly resolutions, most recently in 2009 (A/Res/64/130).
There has been some growth over the years in the number of Youth Delegates, with 45 Youth Delegates
from over 25 countries participating in the 63rd session of the General Assembly in 2009. However,
this still represents barely 15 percent of the total number of Member States.
This low figure can be attributed to, among other things, the lack of easily accessible and comprehensive information about how a national Youth Delegate Programme can be established in a country that does not yet have one. Establishing such a programme comes with its own unique set of difficulties, including convincing government officials of its value, navigating bureaucracy, overcoming funding challenges, and putting the appropriate processes in place for a sustainable and democratic programme.
Although there is no fool-proof method to lobby for youth representation, this guide compiles best
practices based on case studies of successful lobbying efforts