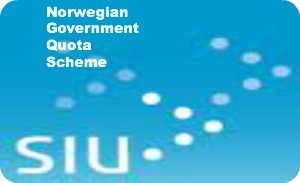 The Norwegian government provides students from developing countries in the South and countries in the Western Balkans, Eastern Europe and in Central Asia with financial support to study for a degree in Norway under the Quota Scheme.

View the List of Eligible Countries for the Norwegian Quota Scheme

Visit the Official Webpage of the Norwegian Government Scholarship Scheme