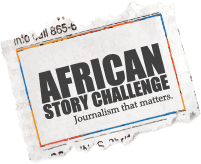 The African Media Initiative (AMI) is pleased to announce the start of the second round of its pan-African journalism competition.

The African Story Challenge is now inviting applications for funding of great story ideas on health.

Twenty projects shortlisted for the final prize will be awarded grants of up to $20,000 each to produce health narratives that use innovative journalistic storytelling techniques around the theme of diseases prevention and treatment in Africa.

Shortlisted stories will focus specifically on issues such as: sanitation and water-borne diseases, infectious and noninfectious diseases, neglected diseases, vaccines and immunisation. Submissions should include investigative, data-driven stories that employ multi-platform approaches and engage the public through social media and other digital tools.

The African Story Challenge advisory council comprising senior journalists and editors will oversee the shortlisting process. The finalists will be brought together for intensive sessions to improve their project ideas. Cross-country reporting and collaboration or joint applications between different media organisations is highly encouraged.

An independent international panel of editors and media experts will judge the entries. Grantees who produce the best stories published or broadcast in media that reach African audiences will win cash prizes or a major reporting trip abroad.

The Story Challenge is a project of the African Media Initiative (AMI), the continent’s largest association of media owners and operators. AMI content development director and former Knight International Journalism Fellow Joseph Warungu is leading the project. The Knight Fellowships are administered by theInternational Center for Journalists(ICFJ).

“Without good health there is no wealth. This competition is aimed at encouraging journalists and media organisations to break away from the routine issues on the daily agenda and pitch to us bold and creative ideas on health,” said Warungu, a former BBC Africa Editor.

“we want to support innovation in the telling of more and better stories on health and development in Africa. AMI is committed to support the media to expand coverage of fundamental issues that matter to Africans and the building of a strong media sector.”

Winners of the first round of the grant programme, which opened in May 2013 and focused on Agriculture and Food Security, will be announced in November. Other themes to be launched next year in this $1M challenge include business and technology.

27th January – 9th March 2014: Field production and post-production. All 20 shortlisted candidates will be given reporting grants following the boot camp and will have six weeks to produce and Publish their stories

The African Story Challenge is supported by an $800,000 grant from the Bill & Melinda Gates Foundation. The programme also has support from the African Development Bank, the Alliance for a Green Revolution in Africa (Agra), and the Norwegian Agency for Development Cooperation (Norad).

Visit the Official Webpage of the African Story Challenge