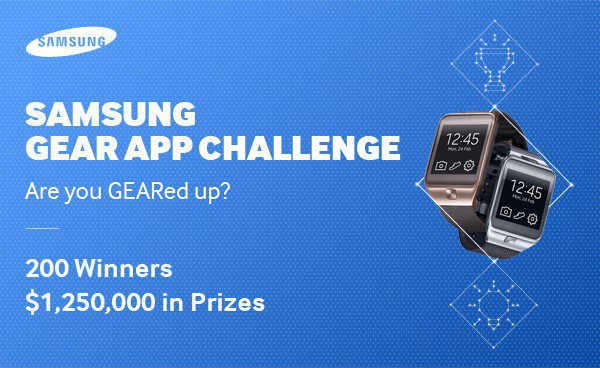 The Samsung Gear App Challenge is part of the series of “Samsung Smart App Challenges” which began in 2012. Over two rounds, developers will have the chance to win $1,250,000* in total prize money, as well as promotional exposure for their apps through Samsung’s global marketing channels.

Wearable tech. Ubiquitous computing. In a world where the future is at our fingertips, Samsung is inviting developers to take technology to the next level by creating innovative, functional, and original apps for the Samsung Gear 2.
Round 1:

Developers around the world are invited to submit applications developed with the Samsung Gear Dev Tool. The top 200 finalists will be selected by a panel of judges, and each will receive $2,000 in prizes.

In Round 2, the finalists from Round 1 will be invited to compete again for more prizes and exposure. Developers will have additional time to improve and modify their apps. Judges will select the top 40 applications and those winners will receive a total of $850,000 in additional prize money and marketing exposure for their apps.

In addition, the public will be given the chance to vote for their favorites among the top 10 apps to choose the Popular Choice Prize winner.

The Samsung Gear App Challenge is open to developers from around the world who have become registered members on the Samsung GALAXY Apps Seller Office website, including:

Please note that the following individuals, teams, and organizations are NOT eligible for the competition:

Only finalists chosen in Round 1 are eligible to participate in Round 2. Please see the Official Rules for full eligibility details.

Platform: Your app may be any one of the three types of Gear app: Linked (Master-Follower) Type, Integrated Type, or Standalone Type.

If the Host-side Application links to a Samsung Galaxy, then the application must support at least one device among Galaxy S5, Galaxy Note 3, Galaxy S4.

Language: Apps must have English language support and may offer multilingual support that includes English.

Round 2: Apps submitted in Round 2 must be finalists from Round 1 and continue to meet all of the Round 1 requirements. Although it is not required, additional points will be given in Round 2 for finalists that use the latest Samsung Gear Dev Tool during the Round 2 development period.

Register to take part in the Samsung Gear App Challenge