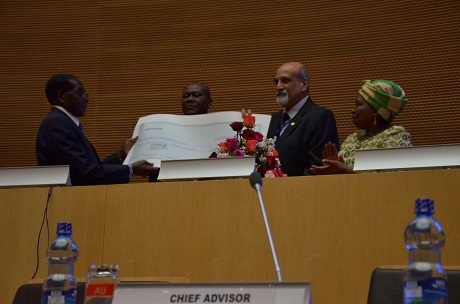 This year’s award ceremony took place on Saturday 31st January 2015, during the 24th Session of the AU Assembly of Heads of States and Governments, at the African Union headquarters, Addis Ababa, Ethiopia.

The Kwame Nkrumah Continental Scientific Awards 2014 were presented on behalf of the Assembly by H.E Robert Mugabe, the President of Republic of Zimbabwe and the Chairperson of the African Union, to Prof. Kofané Timoléon Crépin from Cameroon, recipient of the Basic Sciences, Technology and Innovation Award and to Prof. Salim S Abdool Karim from South Africa, recipient of Life and Earth Sciences Award.

H.E Dr. Nkosazana Dlamini Zuma, Chairperson of the African Union Commission in her remarks, said that the Act establishing the Union recognizes the need to embark on an ambitious strategic science and technology development programme, aimed at contributing to socio-economic development of the continent. She recalled that the Assembly adopted Africa’s Ten-year Strategy on Science, Technology and Innovation (STISA-2024), that will contribute to achievements of Agenda 2063. She further reiterated the urgent need for Member States to implement the Assembly decision of 2006 to allocate 1% of GDP to scientific research.

She added that, the Commission has full confidence that the awardees and indeed the African scientists, realize the great responsibility and trust bestowed upon them to ensure that science, technology and innovation drive socio-economic development and improvement of the lives of African citizens through tackling issues of poverty, employment, increasing population, health risks, food insecurity, depleted natural resources, water, energy, environment and climate change among others. She further thanked the Development Partners, particularly the European Commission for their unwavering support for this programme and many more programmes in the Commission. (The full speech of the Chairperson is available on the AU website www.au.int).

Speaking on behalf of the awardees, Prof. Salim S Abdool Karim expressed optimism that African scientists will make good progress towards a healthier and better Africa in the next decade, particularly in finding solutions to the biggest problems on our continent.