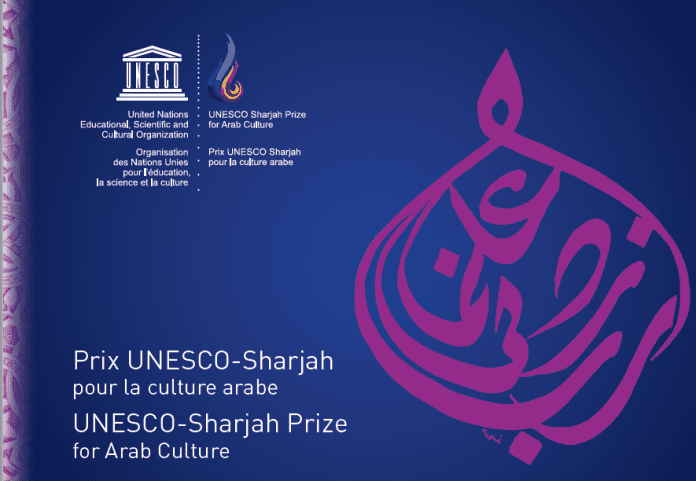 Established in 1998, the UNESCO-Sharjah Prize for Arab Culture rewards, each year, two laureates – individuals, groups or institutions – who, through their work and outstanding achievements, endeavour to disseminate greater knowledge of Arab art and culture.

Applicants to the UNESCO-Sharjah Prize for Arab culture must have contributed significantly towards the development, dissemination and the promotion of Arab culture in the world. The winners are chosen by the Director-General of UNESCO, on the recommendation of an international Jury of experts in the field of Arab Culture and having distinguished themselves, over several years, by meritorious actions. Thus, the winners contribute to the promotion of cultural dialogue and the revitalization of Arab culture.

UNESCO calls for candidatures for the UNESCO Sharjah Prize for Arab Culture. Established in 1998 and endowed by the government of Sharjah (United Arab Emirates), this Prize has been awarded since 2001 and is at its 14th edition.

With a view to increasing the visibility of this Prize further, UNESCO and the government of Sharjah would like to encourage you to propose qualified candidates who deserve to be rewarded for their literary, scientific or artistic achievements, as well as for their global outreach devoted to promoting Arab culture and its worldwide dissemination – independent of any religious considerations.

In an era of globalization and profound political and social changes facing the world, this Prize fully meets the values of mutual understanding that is cited in the Constitution of the Organization. By rewarding careers, lives, whose efforts have been to promote a culture to which they own so much, the UNESCO-Sharjah Prize for Arab culture strives to foster a better understanding of other civilizations, thus promoting, or encouraging international exchange. Arab arts and culture have left traces all over the world, not only has the mosaic of cultures in the Arab region benefitted mutually but also cultures far beyond. One cannot find a better tread for cultivating peace.

Send an e-mail to the Secretariat of the Prize, prix.sharjah(at)unesco.org; tel.: +33 1 45684271, with the name and e-mail of the person authorized to make the submission on your behalf.

The Secretariat will then send all necessary information to the concerned person, notably on how to submit the candidature online.

Nominations for the Prize should be submitted no later than 15 July 2016.

Visit the Official Webpage of the UNESCO-Sharjah Prize 2016