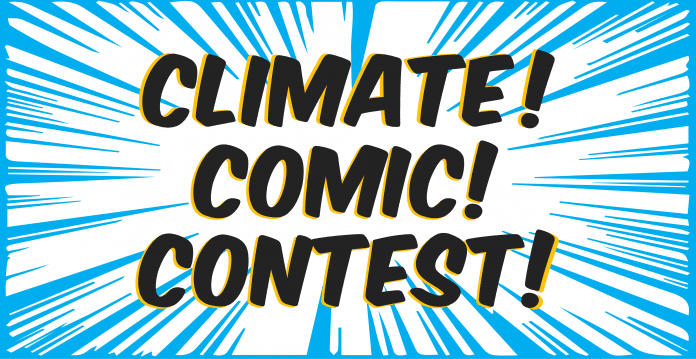 UNICEF is asking young people up to 25 years old to come up with their own superhero whose mission is to combat climate change. Everyone that participates will have the chance to collaborate with a professional team to develop and publish their own comic (which will be shared worldwide!).

○ Make sure your submission includes your superhero name, superpower to take climate action, one of their earth-saving adventures – a simple storyline – and attach a doodle/drawing/sketch of how they look like via our online form. Only one application per participant is allowed.

○ Your submissions MUST include an attached graphic for us to consider them – but don’t worry, we love stick figures.

○ Your submission must be your own and you must own the copyright of the graphic and concept.

○ Only superhero/heroines submitted during the call dates will be considered by our selection panel.

○ You may enter only once so give it all your heart and originality.

○ All young people from 0 and up to 25 years old, from all countries, are eligible. Proof of age, identity and eligibility may be required.

○ If you are under the age of 18, you must discuss your interest in taking part with your parents or guardians BEFORE applying. In the application you will be asked to provide a contact detail for your parents/guardians. Only applicants whose parents/guardians have given consent will be considered as potential finalists.

○ UNICEF creative editors and a member of our publishing partner Comics Uniting Nations will select up to 25 entries submitted via the entry form available in this website. Selection of top comic superheros will be based on creativity, originality and strength of concept.

○ Between 6 -17 November 2017, during the COP23 climate change conference, participants and the public are encouraged to vote for their favourite superheroes/heroines in this website.

○ Participants and public may vote on an unlimited number of entries, but only one vote per day per entry.

○ UNICEF reserves the right to disallow any entry that appears to have received malicious or fraudulent votes.

○ Voting closes on 17 November, 09:00 EST. During the voting period, votes will not be visible to the public to add to the excitement!

○ The global winner will be the entry that receives the most votes and will be announced late November in UNICEF social media and digital channels, including this website.

○ The global winner will work with an artist and vendor to bring his/her superhero/heroine and their story to life. BAM!

○ The comic will be launched on April 22, 2018 during Earth Day. The winner will participate in global launch and activation. Stay tuned!

○ The comic, along with finalists’ submissions may be showcased on UNICEF’s social media channels, as well as at major global events like ComicCon, the United Nations General Assembly in September, Climate Week, and at COP24 in 2018 at UNICEF’s own discretion.

○ From the opening of this contest on October 5, UNICEF will feature submitted entries and finalists’ work at its own discretion. Names of individuals may or may not be included with the featured superhero/heroines when published on the UNICEF websites, social media or in any other medium, digital and printed, at UNICEF’s discretion.

Visit the Official Webpage of the UNICEF Climate Comic Contest 2017